I want to get a sticker from each country I visit. You know, one of those with the initial of the country and/or the flag, to stick at the back of your car. It seems quite an easy thing to find, when you think of how many cars drive around with one or more stuck on their tailgates. Well, it is not, I even had difficulties trying to get my own country’s! I tried petrol stations, car accessories shops, stationer’s, souvenir’s shops… everybody knew exactly what I was talking about, nobody sold them. In the end I was given one bought at a bookshop. It was the same story in France. All across France. I am now in Italy and have left France without being able to get one. Well, at least I am riding through the country again on my way back, I will try again then.

Stickers or no stickers aside, today has been a great day. I got up at about 7am, packed everything away and went for breakfast at the campsite’s café. I did not prepare my own breakfast (as is the plan when I camp) for two reasons – one, I still had money left from yesterday’s budget, so I thought I would have a complete breakfast; two – I had forgotten to fill the jerrycan at every single petrol station I had stopped, so I had nothing to cook with. Yes, really clever.

With my stomach full and having stopped at a supermarket to get a few things I was missing (mints, bread and extra batteries) and see if I could find a sticker, I started to climb the road that led up to the Col du Lautaret. There was very little traffic aside from some cyclists (quite a lot of them, actually) but they were no problem to pass on the bike. The road wound its way up to the col along deep glacial valleys covered in thick forest and soon I was high enough to start catching some glimpses of snow covered peaks between corners.

As the road climbed higher, the views became more and more breathtaking, and I was busy trying to take it all in and enjoying the road, which was one of the best I have ever ridden. No wonder there were so many other bikers!

I stopped at the top of the col to see if they had stickers at the souvenir shops there, but no luck. Going back to the bike I spotted a trio of German bikers on naked Yamahas and went by to have a chat. They were from Frankfurt, and told me they came to the region regularly and had also been to Spain. I asked one of them to take a picture of me and told them about the trip, they were a bit jealous. 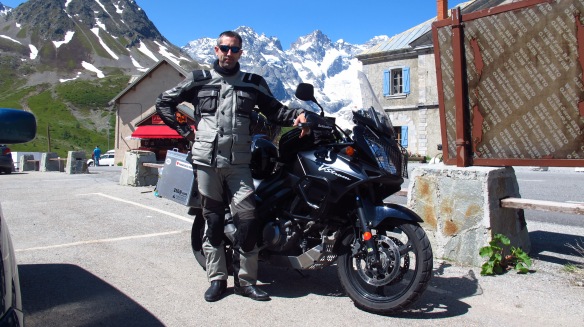 On the way down I stopped to fill up, and this time I remembered to fill the jerrycan even though today I had a sandwich for lunch and I was spending the night at the house of a couple that I had met through couchsurfing. And I asked about the sticker. No luck again.

I rode though Briançon, where they had no stickers either and then into Italy. I had spent all morning in the Alps, a lot longer than I was expecting to, but it was worth every moment; if I wanted to make it to Vicenza at a reasonable time now, I had to take the motorway. And believe me, that is a decision I regret… It was hours of sheer boredom. There was practically no landscape to talk about, only a vast expanse of concrete that took me on a tour of industrial Northern Italy, with hundreds of crazy Italian drivers to keep me entertained, automated toll booths that refused to give you a receipt even if you wanted one and did not display the price and a couple of traffic jams where I had the chance to compare French courtesy to motorbikes – they make room for you to filter through when there is a jam – to the Italian one – basically non-existent, they either can not be bothered to move out of your way or simply swerve onto your path to block you, because if they are not zooming down the motorway, neither should you, damn it. And to cap it all, petrol is a lot more expensive than in France. Well, at least they sold stickers at the first place I asked.

By the time I turned off the motorway I only had 20km to go and had paid way more than I had expected, effectively destroying my budget for the day. I made it to Brogliano, where I was staying, in good time, but at a high price. I will have to stick to B-roads all the way to Ljubljana tomorrow and hope the tank lasts to the border.

On the plus side, the landscape once I left the motorway was amazing, the sun shining low through the trees on the Northern Italian countryside that I had always imagined: undulating fields of green and gold between low hills, quaint villages and winding roads. And some more crazy drivers.

I followed the GPS instructions into the small village of Brogliano, into streets that became narrower and steeper until I came to a point at the end of a steep ramp that looked as if the street split in three driveways and ended there. The GPS, however, insisted that I had to turn left and keep going for about 150m more. Not wanting to ride into anybody’s front garden, I started to maneuver the bike in the narrow space, thinking how ridiculous it would be if my first fall was on a backstreet in rural Italy. When I had managed a quarter of a turn, an old man, who had probably heard the engine revving and was used to finding lost strangers behind his house, waved at me from a window and pointed at the driveway on my left. It turned out it was a street that opened into a bigger one, where I found Mattia, my host, waiting for me.

He helped me put the bike in their garage and then introduced me to his couple, Danilo, who was preparing a mouth-watering risotto for dinner. Taking the chance of having some space to work on, I greased the chain and topped the oil and then had a shower and sat down for dinner with them. They were great hosts, and Danilo is an excellent cook – the antipasti, the risotto and the cheese, as well as the home-made red pepper jam made by Mattia were delicious.  They told me a bit about their trips and themselves and I showed them the route on an atlas.

I borrowed their internet connection to update the blog and get in touch with my next host and went to bed, exhausted but happy. And with a new sticker on my bike.