Most OEM handguards tend to do a very good job protecting from the wind and the rain, but do not usually offer much protection if any at all in the event of a fall, so you are more than likely to end up with a broken gear or clutch lever even if you drop the bike while moving it around (years ago some idiot knocked my V-Strom off while parking and the brake lever snapped).

The handguards on the AT look great, but offer the same level of crash protection as the ones on the V-Strom or the ST. The problem is that those ones were good at keeping your hand relatively dry and warm, but the ones on the AT are too small for that, so they are merely cosmetic additions to make the bike look more rugged.

Even before taking delivery of the AT I knew that I was going to fit it with a pair of Barkbusters like the ones I had on my V-Strom, which had proven themselves to be very efficient in a number of falls/drops. However, as I was comparing prices and trying to find a shop that had a specific kit for the AT, I saw some people on Adventure Rider and the Spanish AT forum that had fitted the Acerbis X-Factor ones.

I thought they would be more expensive, as the aluminum back bone they use is huge, but it turned out that not only were they cheaper than the Barkbusters, but they were available immediately, as no specific mounting kit is required for the AT.

I may not have considered Acerbis handguards for the V-Strom, as they look too ‘enduro’ for that bike, but on the pictures I had seen, they seem to suit the AT fine, so I got a pair.

I went for the black and white combination, as the OEM were also black and I was afraid the red ones might not match the shade of the bike. I got them in a week, and today I got down to fitting them, which is a very straightforward process.

First step is to remove the OEM handguards, including the weights both at the ends of the handlebars and the long ones inside.

Loosen the 5mm Allen bolts that hold the handlebar weights and pull the handguards mounts away from the weights. 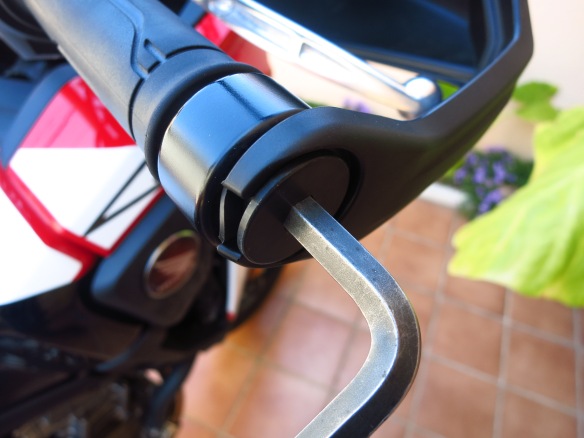 Remove the bolts that hold the handguards to the brake and clutch lever mounts. Both nuts and bolts are 10mm, except the brake bolt, which is 12mm, annoyingly. 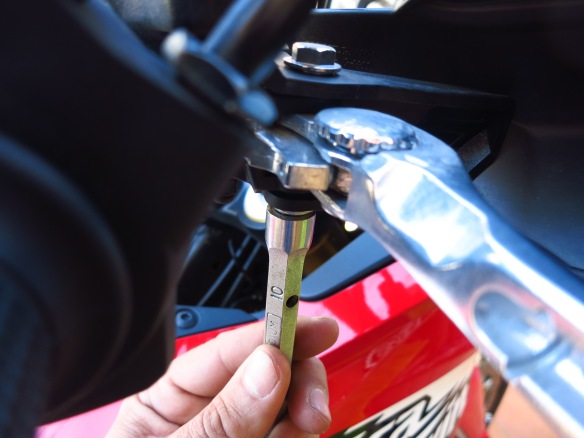 Now comes the difficult part – pulling out the inner weights. They are very long and have a couple of rubber rings, so they do not slide out easily. There is a small cylindrical plate that holds them to the handlebar weights bolts, but it is very easy for those to come apart. In fact, I pulled out the first one and then saw that the plate and the weight were still about 1cm inside the handlebar. 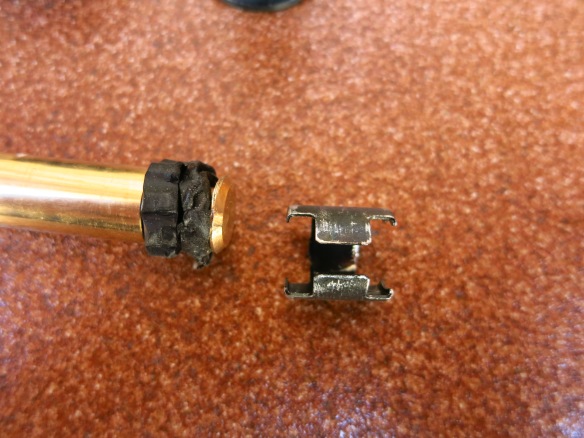 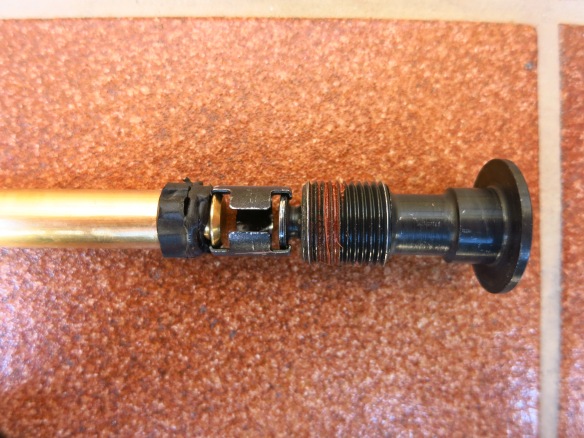 These cylindrical plates are fragile and can come out easily, be careful with them because of they do come out it is practically impossible to grab hold of the inner weight to pull it out. Having suffered this, when I removed the second one I unscrewed the handlebar weight bolt, then pulled gently but firmly until about 1cm of the inner weight emerged and then pulled it out with a pair of pliers.

To get the first one out, I used a pair of long thin pliers to hold the plate and pressed it with a screwdriver to prevent it from opening and coming apart from the weight.

With the most difficult part out of the way, it is time to fit the new handguards. 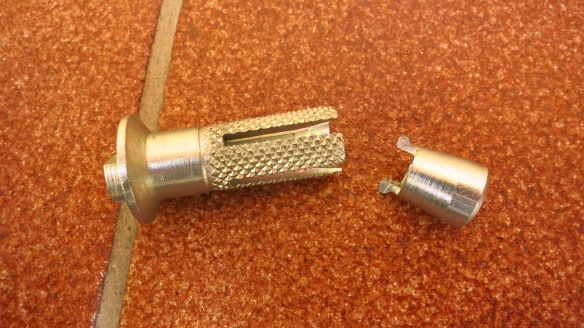 Do not try to put the expansion shell directly into the handlebars first, as there is a risk that the nut at the end comes loose from the shell and then you might push it further inside when inserting the bolt, making it very difficult to recover. Fit the shell to the aluminum backbone and then insert it in the handlebar. 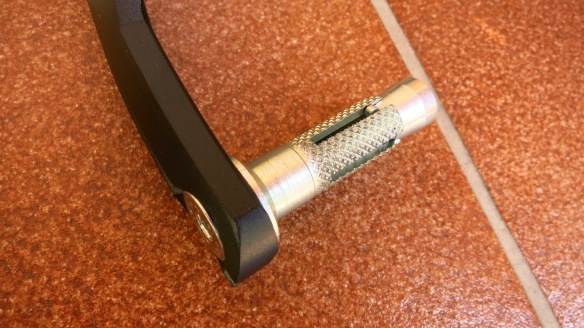 Then fit the support arms to the handlebar but do not tighten, as you’ll need to adjust the levers. It is necessary to move both brake and clutch lever assembly about 1.5cm to the inside to prevent them from touching the backbone when released. Be careful with the clutch lever, too far in and it will touch the switch assembly, too far out and it will touch the backbone. You need to find the sweet spot. 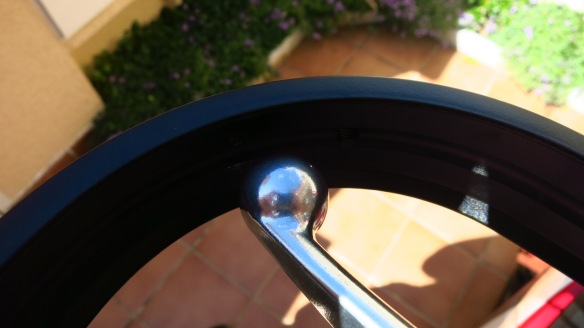 Once everything is in the position and angle you want, start tightening first the mounting arms and then the expansion shells. The mounting arms come with two sets of brackets to fit handlebars of different diameters. In my case I did not need to use either of them. 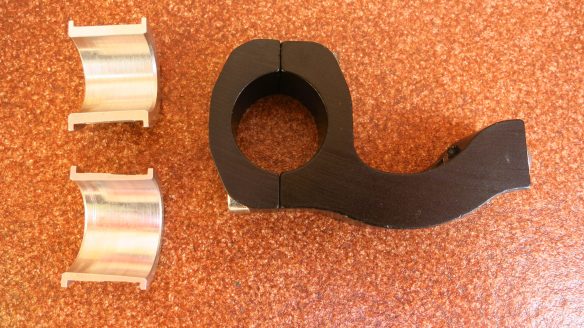 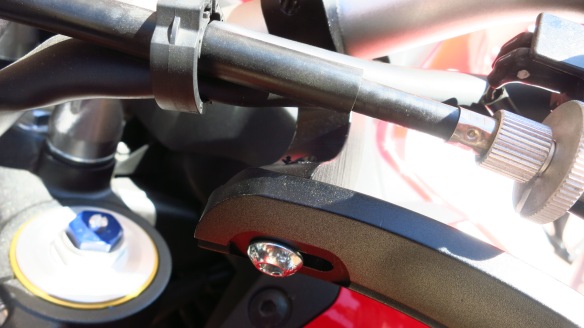 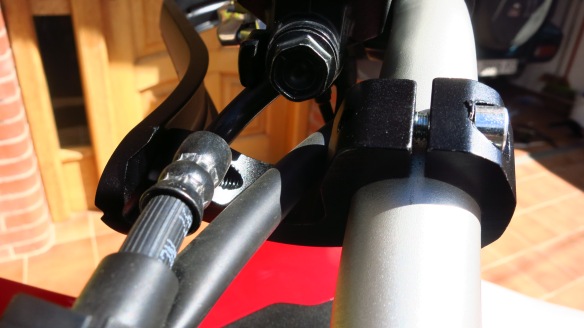 The bike looks great with the backbones only and it is tempting to keep that look, but I want more protection, not less, so the last touch is to fit the plastic covers, which are attached with three Allen bolts each. Done!

I know this is a matter of personal opinion, but I think the X-Factor handguards look great on the AT, particularly in black: 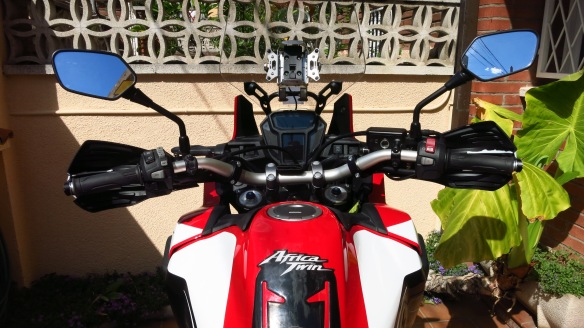 About a year ago, coming back from a short holiday in France, I found that some idiot had clipped the back of my bike while parking his/her car and thrown it on the floor. Somebody had been kind enough to lift it and put it back on the sidestand, but no contact details were left… If it was lifted by some passer-by or the guys in any of the shops in that bit of the street, I hope they didn’t struggle too much with its weight and I am grateful for their bit help. If it was lifted by the idiot who knocked it over and left without leaving any contact details, I sincerely hope he strained his back and still feels the pain to this day.

Anyway, the resulting damage was a scratched engine guard bar (I was glad to have them, as bodywork replacement parts are terribly expensive), a smashed indicator, a cracked mudguard and a broken brake lever.

As I was doing research for this trip I soon came to the realisation that my off-road riding skills are pretty much non-existent. I have ridden the bike fully loaded on dirt roads that were in good condition without any problem, but only for about 30 miles, and that’s it. Knowing that I would be dropping the bike more than I would like to once I get to the roughest parts of the trip (Kazakhstan and Mongolia) and not wanting to repeat the broken brake (or clutch) lever experience, I decided to replace the handguards on the bike.

The ones that came with the bike were the original Suzuki items, which are wonderful for weather protection – they effectively keep the wind and rain away from your hands and work really well in combination with the heated grips. However, they are only a piece of plastic that clicks into the weight at the end of the handlebar, with no metal structure, so they offer no real protection in case of a fall. 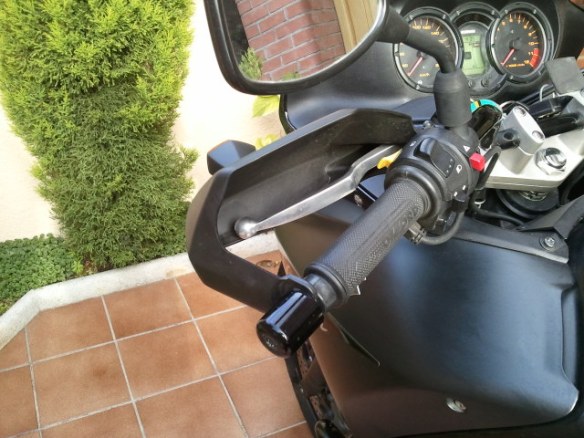 I decided to replace them with something beefier, and after some research I settled on a pair of BarkBusters. They look great, and the thick aluminium backbone offers a good degree of protection should I drop the bike (or rather when I drop the bike!).

I got them online from Ubricar Motos at a reasonable price and they were delivered in just a couple of days. Great! If it were not for the fact that I was sent the mounting kit for a BMW GS… doh!

In their defence, I have to say that customer service was really nice and helpful and they dealt with the mistake efficiently. The wrong handguards were picked from my apartment and in a couple days more I had the right ones, all free of charge, obviously.

I sold the original ones through the owner’s club and got down to installing my new toys.

I rode for a few days without any handguards at all and I missed them much more than I thought I would… they do offer a lot of wind protection.

The right mounting kit for my V-Strom. Those aluminium backbones look solid enough to do a good job. 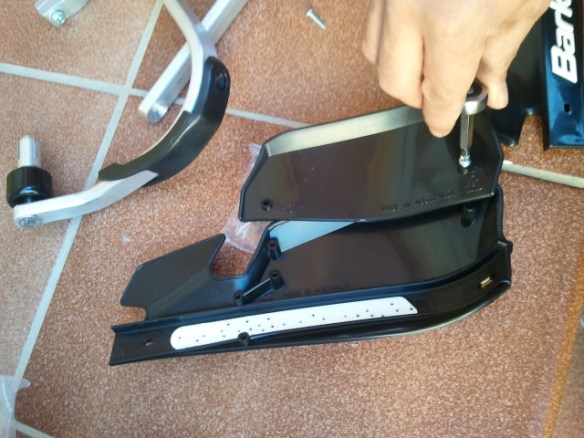 The kit includes a pair of extra “flaps” that can be mounted at two different heights for added wind protection. I placed mine in the highest one. 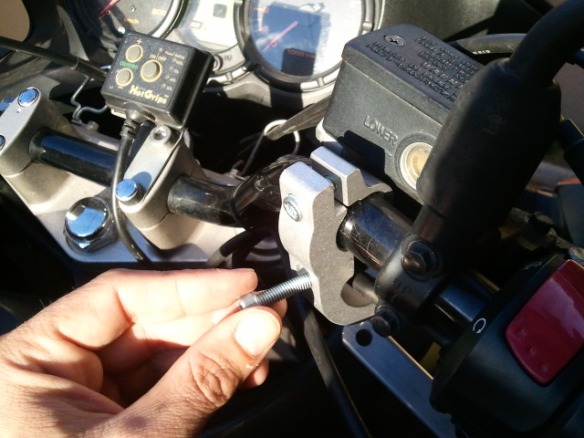 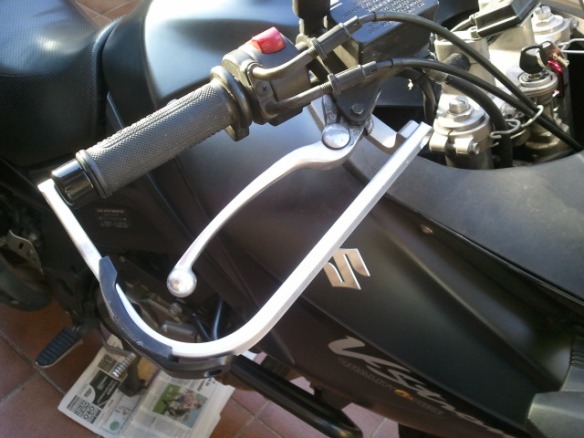 The whole process is really simple and does not take more than 20 minutes to complete. The handguards come with their own counterweights and two different sets of screws so they can be mounted on either steel or aluminium handlebars.

And this is how the whole thing looks now. It does improve the looks of the bike and I am sure they will offer good protection – but the longer it takes to find out, the better!