After a long wait (almost two months), I finally got the Holan crash bars for the AT. I have already fitted handguards, so all that remains now before I can offroad with peace of mind is a pair of knobbly tires.

I picked up the bars from the shipping company and as I was taking the tools out to the front yard I was readying my mind for whatever challenges Holan was going to throw at me this time – missing bolts, nuts or washers? misaligned mountings? – both from personal experience with the panniers and from what I usually read on forums, I was sure something was not going to go as planned. And I wasn’t wrong.

The surprise came as soon as I unpacked the upper crash bars. Holan makes two models, the ‘standard’ one and the ‘Pro’ one. The main difference, other than a slight difference in shape and the position of the bar that crosses under the headlight, is that the ‘Pro’ one has two additional mounting points that fit in the radiator mounts of the motorbike.

Whether you want them or not, if you are buying them through the Spanish distributor, these are the only available option, but surprise motherf***er! Mine did not have the extra mounting points. They sure were shaped like the ‘Pro’ ones, but that bit was missing.

I had chosen Holan because I liked the fact that they covered as much of the fairing as the products from Honda, Touratech and Hepco & Becker for considerably less money, but also because they already included mounting points for the fog lamps. As for how sturdy they are, only time and crashes will tell. None of the alternatives (except for the Motortek ones) have the mounting points to the radiators, and having waited two months, I was not very keen on sending them back and face another two months wait, particularly when my holidays are coming up and I need the bike equipped for the trip, so I decided to keep them and ask for the difference to be reimbursed (the ‘Pro’ ones are 25€ more expensive). Time to fit them and see if there were other ‘surprises’ in store (other than the known fact that Holan does not include instructions).

The good news about both the upper and lower Holan crash bars is that they do not require the exhaust manifold to be removed, as they do not attach to the upper bolt in the engine mount, making things a lot easier.

I decided to start with the engine crash bars, as they only have two mounting points each and the process is very straightforward. At the back both use the mounting point for the piece of plastic that keeps your boots from scratching against the frame. Remove the Allen bolt and pull the plastic out on both sides of the bike.

Holan provides two longer Allen bolts with a washer to replace the OEM ones. (I like the fact that they seem to be of considerably better quality). Nothing missing so far. 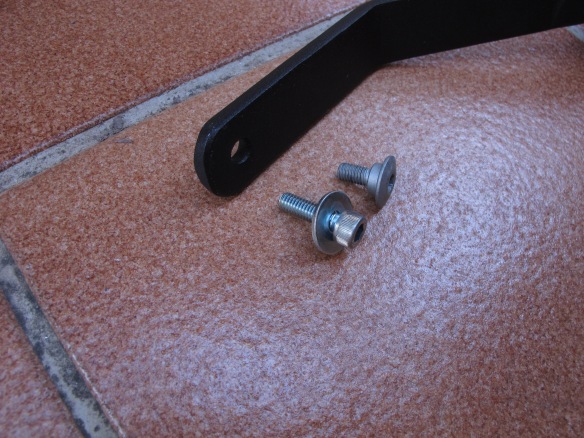 At the front, the right one uses one of the bolts that connect the cradle frame coming from the bottom of the engine to the vertical beam between the radiators.

The OEM bolt is long enough, so no replacement bolt is provided. It is a bit tricky to remove with your fingers and to put back in place with the crash bar, but both to loosen it first and then to tighten it again there is enough space to work with a spanner without any problems.

There have been reports of problems with the plate at the back end of the right engine crash bar touching and bending a bit the plastic that protects the clutch housing. Some people have just left it that way, others have filed off a bit of plastic (number 2 on this picture, which is from a DCT model). I had no such problems.

The left crash bar mounts on the lower bolt of the front engine mount, and this is shared with the upper left crash bar, so you need to fit both at the same time.

At this point, the easiest way to proceed is to line up both upper crash bars, insert all bolts, nuts, spacers, and washers without tightening them and then tighten them one by one. It is much, much easier if you have a friend to help you hold the bars while putting everything in place.

Here was where I had the second and only other problem. The upper and lower crash bars are sold as separate products; you can buy and fit one or the other independently or both at the same time. The thing is, Holan does not make any special provisions for those who are going to fit both, which means that when it comes to the lower bolt on the front engine mount, they provide a longer bolt with the lower crash bars to accommodate the flange at the front of the bar, and another bolt of the exact same length with the upper crash bars to accommodate the flange at the bottom of those bars. See where this is going? When you put both flanges together in the same point, neither of the bolts provided separately is long enough. 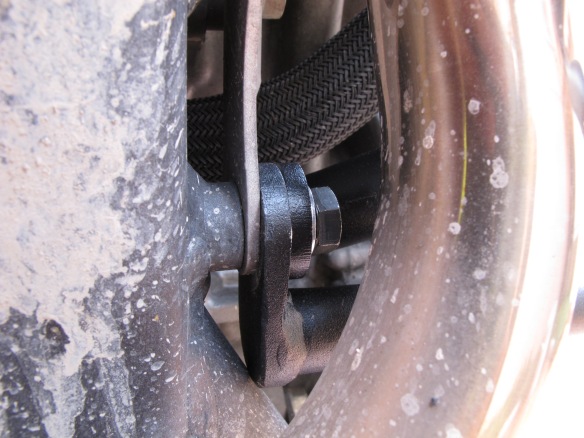 I had to leave things half mounted and go try to find the right bolt. More than an hour and three specialised shops later, I got one. 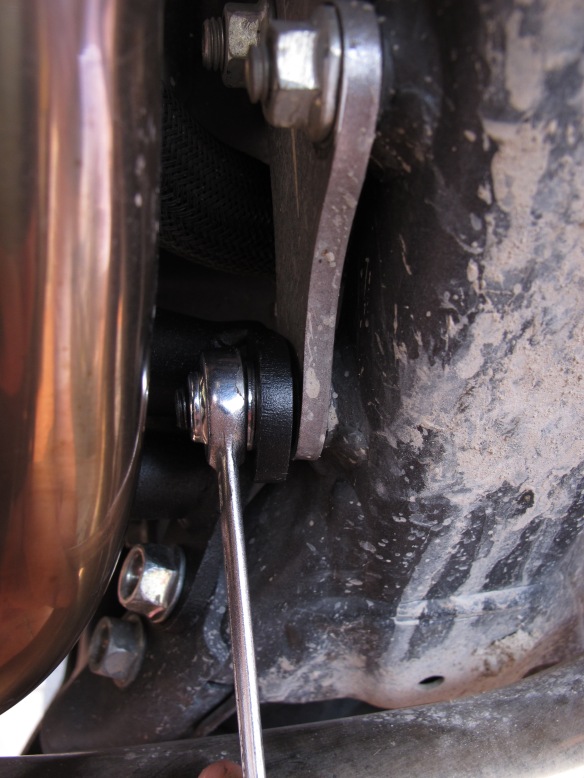 At the top, the two halves of the upper crash bars are held together with two Allen bolts which are colour silver and stand out quite a lot against the black bar. It might be a good idea to either paint them or replace them with black ones.

The other mounting point for the upper crash bars (unless they are the ‘Pro’ ones) is under the headlight. Two plastic spacers and two bolts and nuts are provided. In my case, everything lined up without any problems and did not have to modify or bend anything.

Now we only have to wait and see how they fare when I start dropping the bike. 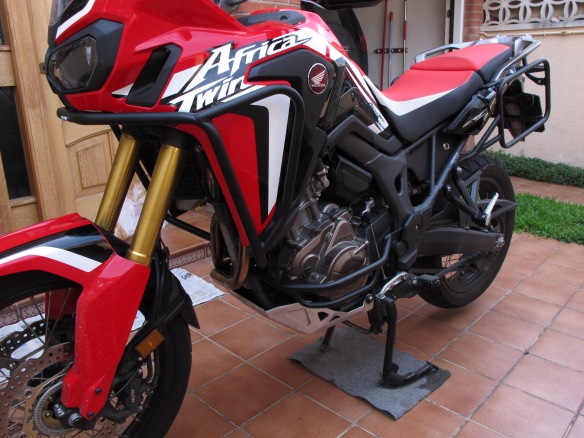 Well, it has been a very productive week and weekend! Unfortunately that means that I am now behind in keeping the blog up to date, there’s a lot to write about; I will do it on separate posts. First one:

A couple of weekends ago I got down to installing the crash bars, headlight guard and skid plate, which I had not had time to install when I did the panniers and GPS mount. I had seen some people have trouble aligning the mounting points with the chassis on YouTube tutorials, but I am happy to say I had absolutely no problem. The only setback came from the long screw that goes from one side of the chassis to the other and supports the engine block. The crash bars that were installed on the bike when I bought it second hand were the original Suzuki ones, and they are attached to that screw. I imagine that when you buy them the mounting kit includes a longer screw that enables you to attach them. I removed the crash bars and saw that with separator washers the screw had enough thread in it to stay in place effectively, so I thought I would have no problems installing the Hepco & Becker bars, which attach to different mounting points. However, they partially cover the recess on the chassis where this screw is located, and because the longer screw I had in my bike protruded out of the chassis, it was impossible to fit them.

So, a week later and having purchased the original screw from a Suzuki dealer I was able to fit the bars without any problems. They offer far greater protection than the original ones, are thicker and look cooler.

The problem came, however, when I had to install the skid plate. Adventure MotoStuff had supplied it with a mounting kit for the Hepco & Becker crash bars, but from what I could gather from the pictures, Hepco & Becker had discontinued the bars for the pre-2012 V-Strom and developed new ones for the new model. Since both bikes have the same chassis  the bars will also fit the older ones, and these are the bars that I had bought. However, AdventureMotoStuff had sent me the kit for the older model, which has a lower crossbar, so the mounting brackets were about 100 mm too low. 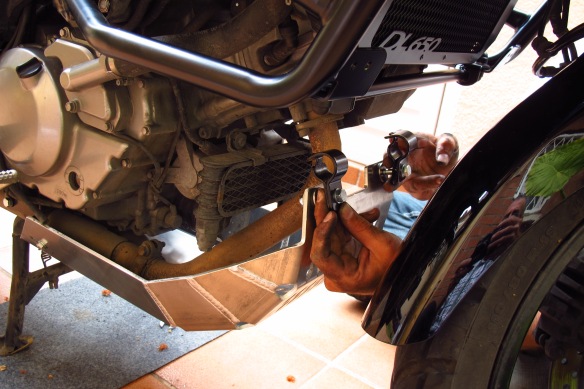 Now, on a previous post I made positive comments about this company’s customer service, when I was trying to decided which combination of crash bars and skid plate to use I wrote to them and they replied promptly with clear and useful information. I am afraid that I will have to withdraw those comments now… I sent them an email explaining the problem I had and including some pictures for reference, inquiring whether they manufactured mounting brackets for the new bars or not. That was two weeks ago. I am still awaiting their reply.

Seeing I was not going to get any help from them, I bought an aluminium bar and built my own extension to fit the skid plate. Here’s the result:

It is a lot more solid than it looks or than I expected it to be, so I am quite optimistic that it will work without problems during the trip.

Finally, I fit the headlight guard. The V-Strom has enormous headlights and they are very exposed to small stones flying from the road or even small falls, so I decided this was a must. However, with such big headlights the mesh I had to fit was enormous, unlike the more discreet protectors for, say, a GS. Even so, once fitted it looks better than I expected. 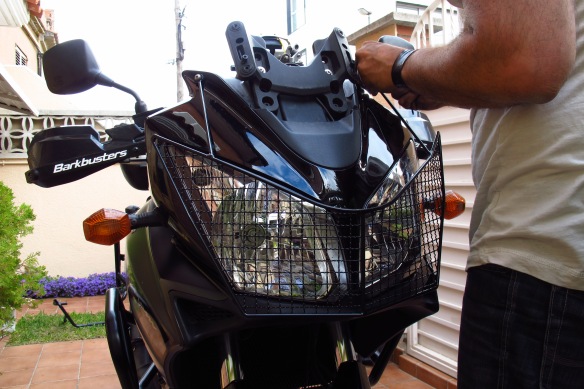 A huge parcel arrived yesterday morning! It was early and I still hadn’t got dressed so I opened the door in my dressing gown, unshaven, with great bed hair and a mug of coffee in my hand… Must have made a great impression on the delivery guy.

Anyways, after opening the box and removing a looooooot of air bags,I found my new crash bars! I have the original Suzuki ones (still for sale, by the way), but they are too low and while they protect the plastic fairings in the event of a silly fall on tarmac – they have done their job well a couple of times – I’m afraid they won’t be enough if I drop the bike on rough terrain, so I wanted something beefier and that offers protection higher up than these ones.

The Hepco & Becker crash bars look great, made from thick steel tubing and great attention to detail. They even have mounting points to install floodlights, nice detail. The only thing that worries me is that they fit both my bike and the later model (2011 onwards) and in the instructions pictures the bar that attaches one side to the other seems to be mounted lower on my model than on the new one – it seems to have slightly raised mounting points. In any case, neither of the bars pictured looks like the one that came with the set and the instructions make no difference between the two models, so it should be alright. I’ll report when I find a moment to install them.