I shall be telling this with a sigh
Somewhere ages and ages hence:
Two roads diverged in a wood, and I,
I took the one less traveled by,
And that has made all the difference.

My name is Kilian and I’m from Barcelona, Spain. I have lived here most of my life, except for a couple of years. I got a BA and later an MA in Translation and Conference interpreting and I spent some time in Wales and Belgium before settling back here to work as a teacher and a translator.

I got into the biking world quite late in life, and I have to confess it was out need rather than passion. You see, I bought my first motorbike as a tool to commute to work when I realised that I spent more time trying to find a parking spot for the car than actually driving to work. Since scooters were ridiculously expensive for what they are, I got a Yamaha YBR Custom 125 that I could ride with a car license. Years earlier a friend of mine had taught me how to work the gears and the clutch on a bike, so I thought that would do.

However, it did not last long. As everyone who had a “proper” bike had told me, if I got a bike with gears and a clutch it would not be long before I yearned for something bigger, and right they were! About a year later I got a bike license and started looking for something that would allow me to travel further, at least at the weekend. This is how I bought my present ride, a 2007 Suzuki DL650 ABS, the Wee-Strom. 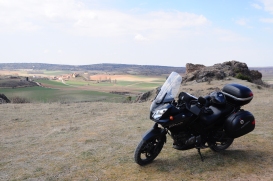 The bike is immensely comfortable, and soon the weekend trips were not enough. I spent Easter riding across Spain, and having discovered Long Way Round and Mondo Enduro some time before, I started thinking about a longer trip.

Looking for information on a possible trip on the internet, I soon found The HUBB and The Adventure Rider Motorcycle forum and was totally hooked. I have visited most of Europe, but I am still to discover other continents and more exotic landscapes, people and cultures, and both this curiosity and my personal circumstances, together with some revealing conversations I had in Poland over the summer made me decide that I wanted to set off on a RTW trip.

The planned route was to head east across Europe, Northern Asia (Russia, Kazakhstan and Mongolia) over to Canada, then south along the Pan American road all the way to Argentina and then fly back home. Unfortunately, it was not to be. After weeks of planning the route and working out a budget, I realised that I would have had to ship/fly the bike three times – from Northern Asia to North America, from Central to South America (I had not counted on Darien’s Gap…) and from South America back to Europe – and that raised the cost well beyond my means, even if I travelled really cheap and sold my car as I originally intended to do.

At that point I decided to plan my trip from a different angle: how far could I get without shipping the bike? I had three options: I could ride south into Africa, north all the way up to Nordkapp or east. The African option was quickly dismissed for safety reasons and Europe was too expensive (and close enough to explore in shorter trips in the future), so I settled for the Asian route.

I will set off at the end of June on a route that should take me through France, Italy, Slovenia, Hungary, Ukraine, Russia, Kazakhstan, Russia again and Mongolia. From there I’ll ride north into Russia one more time to get on the Transsiberian and go back to Moscow, and then, depending on the time and money left, either back to Spain or across the Baltic states before heading back home.

This is the trip of a lifetime, and there are many reasons why I decided to do it, but most of all, I want to experience the world first hand, and travelling by motorbike is the best way – you get to no only see, but smell, feel, take in the countries you ride through. This will also be a trip to explore my inner self. I can not even begin to imagine what will come out of it all, but I hope you enjoy the story here.