Today was going to be, again, a day without breakfast. I took the bags to the motorbike, which I had left in a car park next to the police station. I had been told that it cost about 5€ for 24 hours, but as I walked to the bike I realised that the only thing separating the car park from the road was the pavement , and there was a small ramp for wheelchairs leading from the car park to it, so I was very tempted to just ride up to the pavement, onto the road and out of the city with an extra 5€ in my pocket, but when I went to validate the ticket at the machine to check the price I realised that at that time of the morning there was already a worker in the control booth, so I forgot the plan and paid like a good law-abiding citizen. Anyway, I did not want to leave a bad impression of adventure bikers in such a nice city.

I crossed the Ponte 25 de Abril once more, happy to see that while I had had to pay a bit over a euro to cross it into the city, there were no toll booths on the way out, even though I was made to pay for the motorway further down the road. About 50km separate the capital from Setubal, where I was heading to board a ferry that would take me to Troia, a small town at the northernmost tip of a narrow strip of land stretching from Comporta that separates the Estuario do Sado from the ocean. There was a ferry at half past every hour, and if I hurried and the process of getting the tickets and boarding was not too long I calculated that I could make it to the 10:30 one, so I reluctantly paid for the motorway once again and sped down to the harbour.

I bought the ticket at booth on the entrance of the harbour and found quite a long queue of vehicles already waiting for the ferry, which was just coming in. I stopped behind the last truck, but then three guys who were trying to sell cheap sunglasses and other stuff to the people waiting in the cars told me to ride all the way to the front. The advantages of travelling by bike… There was another biker there, a guy from Lisbon who was going to spend the day on the beach on the other side with his girlfriend, and we chatted for five minutes while the incoming traffic rolled out of the ferry and then we were told to ride up.

It was a sunny day, and the crossing offered magnificent views of the estuary as we sailed from one side to the other, passing a few enormous cargo ships on the way. I wanted to have breakfast on the ferry, but I was so busy admiring the views and shooting some videos, and the crossing was so short, that I missed the chance once again.

The ferry dropped us on a small jetty where a few cars were waiting to board, and I said goodbye to the other biker and his girlfriend and rode out of the tiny harbour and turned right, past some military facilities, heading north to find some Roman ruins I wanted to visit. The settlement is on a small peninsula within the peninsula, near the northern tip, and was inhabited until the 6th century. It included some baths, two-storey houses and facilities to dry fish, which was probably the main source of food and income of the town.

Across the ruins, a few rotten hulls of fishing boats lie on the beach, offering the amateur photographer some really good shots. 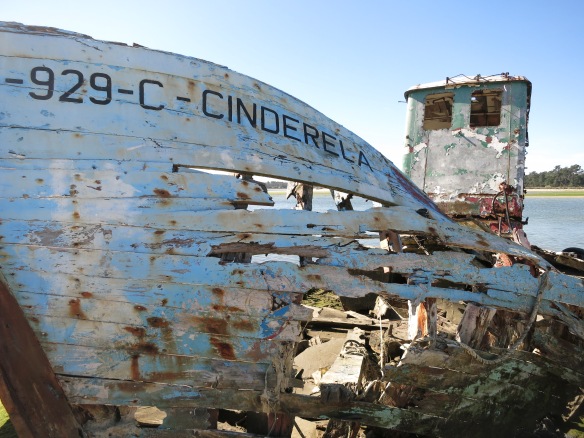 The sun was already quite high by the time I got on the bike again to head south, so I removed the thermal layers of the jacket and trousers for the first time in the trip. We’re going to the beach!

Troia peninsula is more than 10 km long, but only a few hundred meters wide, and from the road white sand beaches can be glimpsed through the pine trees, some people sunbathing, a few brave ones swimming and a lot of them fishing.

Comporta is a small fishing town where the peninsula meets the mainland, and from there on, a small road follows the coast all the way south. My plan was to ride on that road, taking smaller ones at some points to get closer to the coast to see the beaches and cliffs and visit some capes and lighthouses.

Out of Comporta, and as I rode south through the first few towns, I was surprised at how quiet the area was. The landscapes are amazing, and the coastline offers a beautiful combination of beaches and cliffs, but there seemed to be little in the form of tourist industry for such an idyllic place. There were small hotels and signs of rooms to let above some restaurants and cafés, but that was about it.

My first stop off the main route was to visit the Lagoa de Santo André, a fresh water lagoon by the beach, and a good place to have a swim in calmer waters than those of the Atlantic. It was a shame that despite the sunshine, the weather was a bit too chilly for a bath… From there I went down to Sines, with the intention of riding the ring road around the it and see the cliffs west of the city. I was surprised to find the city was dwarfed by huge refinery facilities, and there was a motorway made of oil pipes leading from the coast inland to the refineries. There was nothing much else to see, so I decided to ride on.

Out of Sines the landscape improved quickly, once the city and the industrial area was left behind the natural reserve of Sudoeste Alentejano e Costa Vicentina started, stretching all the way to the southernmost point of the country. I was glad this place had been declared a protected area and there were no huge apartment buildings spoiling the coastline as there are in most of the Mediterranean side of the Iberian Peninsula. There were only small fishing towns every now and then, and by lunchtime I stopped in one of them, Porto Covo. It is a tiny town of whitewashed houses and narrow streets leading to the beach. I stopped in what looked like the main street, a pedestrian street gently sloping towards the beach with a couple of restaurants and a souvenir shop, chose a restaurant that looked good and sat down at a table in the street. 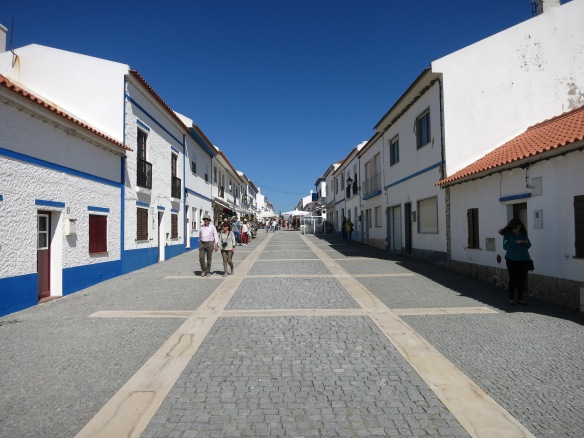 This was my third meal in Portugal, and I was starting to realise that while the prices were similar to Spain, the amount of food was not. One dish can easily serve two people, and in fact that is common practice, most people order one dish and share it. By the time I was done with my meal I was too full to get on the bike again, so I took out my book and spent about an hour enjoying my black coffee and reading in the shade.

I took it much easier in the afternoon, combining the main road south – which was not such a main road, it was still a nice, narrow country road, winding up and down gentle hills – with some detours to visit sights: a small abandoned resort overlooking a beautiful beach past Longueira, cape Sardao in Cavaleiro, a small church by the sea near Sardanito… From there i regained the main road in Sao Teotónio coming down from the hills that overlooked the sea, and rode to Aljezur, where I turned away and up the hills again to ride the loop that is the M-1003-1, at the tip of which there were some roman remains of what had been a settlement built on top of the cliffs. 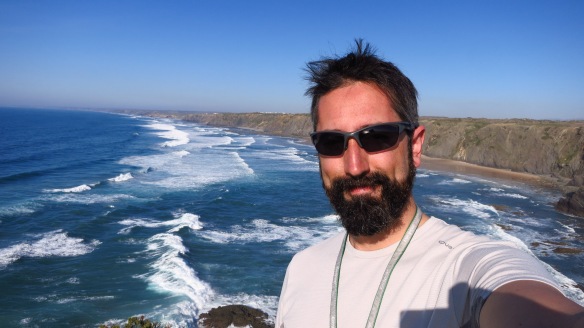 There was one more stop to make before riding the last bit of the day’s route to Sagres, a small detour to visit a beach and another cape near Carrapateira. It was already getting late by the time I got there, and before starting on the road to the beach I saw a small restaurant with a front porch made of bamboo canes and some hammocks rocking in the gentle early evening breeze; there was a hand-painted sign saying “rooms available”, so I decided that it was the perfect place to spend the night. I had considered camping, but all the batteries for my GoPro were empty, and I needed somewhere to charge them up for the following day. And what the hell, the place looked very welcoming and staying there would give me time to see the sunset from the top of the cliffs nearby. 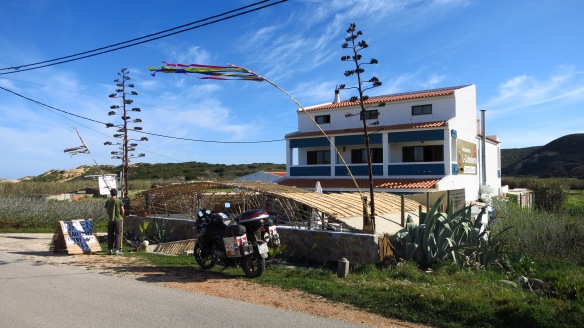 I checked in, went for a walk on the beach and rode up the cliffs to see the sunset. By the time I rode down back to the hotel it was already dark. I had a shower and then enjoyed a wonderful dinner of grilled octopus, fished that morning, with vegetables grown in the back of the restaurant.