We got up at 6am and the hotel was already bustling with activity – a whole party was setting of to China with Sambor, the guy from AdvFactory, others were ready to leave for Mongolia, others had just landed in Bishkek and were already dusting off their bikes, which had been sitting at the hotel for over a month, and an Italian guy was fighting with his old Africa Twin trying to convince her to stay running. We joined in the frenzy and started loading our bikes, a process which always takes much longer than expected and is never right the first time. Well, nevermind, we’d have plenty of time to perfect it over the next few days.

We were lucky it was Sunday, as the traffic was much, much calmer than on the previous days, so getting out of Bishkek was a lot easier than I feared but that did not free us from going through the rite of passage this kind of travel inevitably entails – getting stopped by the police to try and extort a fine out of you. There were police cars stopping drivers every few kilometres outside the city, I don’t know if it is a regular thing or it was because it was Sunday and possibly the first weekend of holidays for many people and we were travelling on a road to a popular tourist destination. Be as it may, we went past many of them without problems, riding at the same speed as the rest of the traffic, until one signalled us to stop. Marc was riding first, so he stopped a bit further down the road and I stopped closer to the police car. The guy came to me making gestures that seemed to mean that it was not me he wanted to stop, it was Marc, but when he got to me I got off the bike, shook his hand respectfully and introduced myself. He asked me where I was from and when I said Barcelona he inmediately started talking about football and by the time Marc had reached us he was explaining that he had a team with his police friends and they called themselves Barça. When he saw Marc he explained that he had been doing 51km/h through some roadworks and the limit there was 40. He said up to 50 was OK, but above, he mimicked writing a fine with his hands. That was total bullshit, as we were all going at the same speed, so we kept smiling and talking about football. He asked to see Mark’s license, had a quick look at it and let us go with a friendly shake and a reminder not to go more than 10km/h above the limit.

From there on, the route was rather monotonous, it was a main road in relatively good condition, the only entertainment provided by the occasional sucidal overtaking, until we turned off to visit Burana Tower. 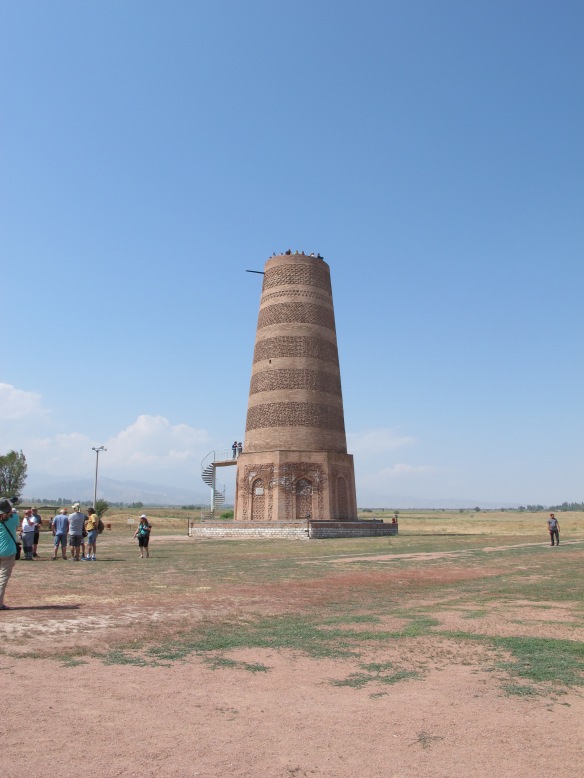 This tower is the only thing that remains of an ancient city calle Balasagun, and it was used as a watchtower from which fire was lit to send a message to warn about danger or invaders. We had barely parked the bikes at the entrance when we were surrounded by curious people, all asking questions about the bike and wanting to have their pictures taken with us. We had a quick look at the tower, and went on towards our destination for the day: a yurt camp by lake Issyk-kul, the largest lake in the country, measuring 182 kilometers long by 60 kilometres wide. 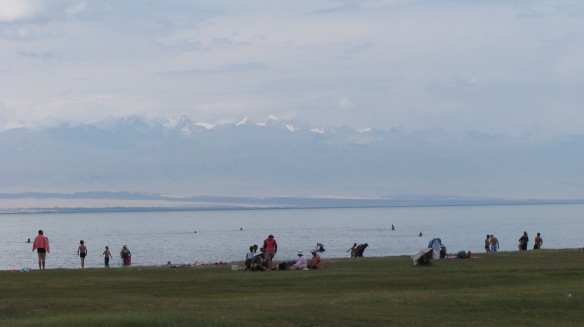 We had been travelling at relatively low speed, so our fuel consumption was really low and we were not too worrid about finding a petrol station as the road around the lake was a main route, but after passing village after village with abandoned stations as our fuel was running low, we began to worry. We had not filled our jerrycans because we did not want to carry too much weight, and as we were starting to realise it was a mistake, we turned a corner and saw small petrol station and lots of cars queueing for it. We had to wait for a while, but we got enough fuel to have peace of mind for the following days, which was nice. What was not so nice was how 10 extra kilos felt perched high at the very far back of the bike… 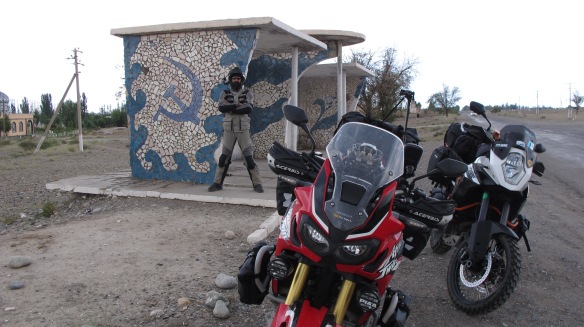 We reached Tossor and stopped to buy some supplies and ask for directions to the yurt camp. We were pointed down a side street that turned into a sandy track before reaching the camp, which our heavy bikes did not like one bit. Marc made it through without problems, but I almost fell over. Luckily, I reached the camp without incident and we immediately went for a swim in the lake. 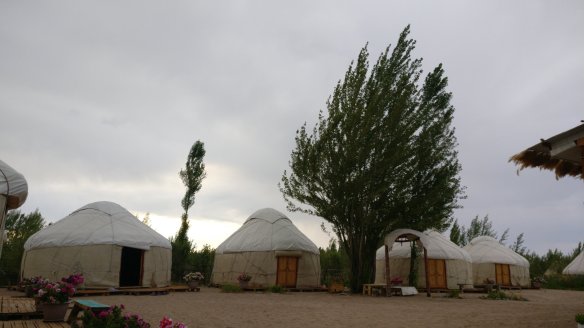 Having been to Romania instead of heading for Ukraine straight from Hungary meant that I broke one of the rules I had set myself – to spend the night before a major border crossing near the border to get there relatively early in the morning in case there were problems with the paperwork and it took a bit longer than expected. Another consequence of that decision was that instead of going through an international crossing, I had to go through a small rural one, and some of those only allow locals to use it, not international traffic.

So, having also broken another rule – to keep journeys shorter the furthest east I went – I set off on a 10-hour ride through a border I was not sure would be open. I got there at about 2 pm, and lucky me, they let me into Ukraine! I was quite nervous about it, I was leaving the EU and I was afraid they would find some kind of problem with my documents or the bike’s, but there were none. The good thing about a small crossing is that there were no long queues, only four cars in front of me, but they still took their own sweet time and I baked under the sun for half an hour. Once into Ukraine, the bad thing about a small crossing became apparent quickly – the road.

Remember the Romanian pothole? Well, it is nothing more than a small bump on the road compared to this. Not only were they deep, there were thousands of them, all over the road, meaning that cars and trucks had to swerve around them, using the whole width of the road and often driving on the wrong lane. I had to stand on the footpegs and could only use first and second gear. It was hot, sweaty and dusty. This was the kind of thing that I was expecting in Kazakhstan, not on a road connecting two countries in Europe. It went on for about 50 km, after which the road turned into what I would have described as a bad road in Romania, which was a huge relief after that bit. I am ready to do this sort of stuff, but not as part of 600-kilometer days. 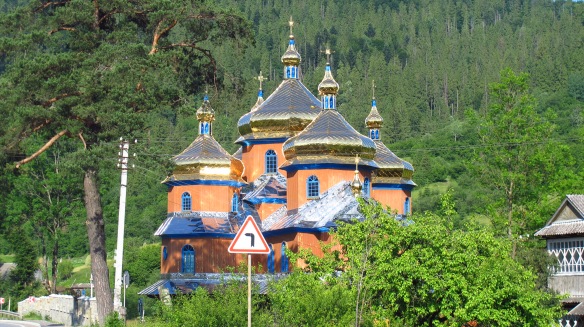 Once I joined the main road coming from Poland things changed, the road became much, much better and I started making progress. I did not ride too fast, as I had heard lots of horror stories about Ukrainian police and how strict they are with foreign drivers, but I still did what I had been doing for the last four or five days and what every other driver on the road was doing – overtake whenever you had space and was safe, regardless of road signs.

Well, it is common practice and there is nothing wrong with it, as long as you do not overtake the chief of police from the next village going back home in civilian clothes on his private car. Needless to say, he made sure that his colleagues were waiting for me at the next checkpoint, and as soon as I got there they flagged me down. The policeman spoke no English at all, but he made it clear that I had overtaken on a double line using gestures, and when the chief of police arrived he used the same gestures before driving away again and leaving me in the caring hands of his subordinate. The guy asked for the bike’s papers and then asked if I could speak Portuguese, because apparently he knew someone at the Portuguese consulate and was going to get them on the phone so that they could explain me what I had to do. He handed me his mobile phone and I spoke to a girl who spoke English, who told me that the fine was a hundred euros. Now, I had been given some advice on how to try to deal with police in these countries, but in this case it was obvious that I had broken the law, so there was nothing else to do but to pay. That would put a huge dent on my budget… However, the girl on the phone said that I had two choices – I could get an official written fine and then go all the way to Kiev to pay it before I could get the bike’s papers back, or I could pay there and then, it would be half price and I could go my way. I gave the phone back to the police officer and he gestured me to follow him into a smaller room. We walked in, he sat down and took some official forms, which were the fine, and his mobile phone, put them both on the table and pointed at them. I pointed at the phone, and then he handed me a piece of paper and a pen. I wrote ‘50€’, he nodded and then stood up, lifted the cushion on which he was sitting and pointed under it. I put the money there, he put the cushion back and then he was all smiles, asking about my trip while he walked me back to the bike, telling me to be careful where I parked it in Lviv because it was dangerous and even writing the speed limits on his palm to remind me not to break them.

Well, after the money I had saved over the last two days, I was only a few euros out of my daily budget, I had come off lightly and I had had a first hand experience in bribing the Ukrainian police. What a day!

After that I still had more than 200 km to get to Lviv, and once I got there, tired and smelly, it was hard work finding the place where I was staying. In the end, Igor, my host, walked out to the street and found me, trying to get directions from three guys who did not seem to understand what I was asking them.

He took his car and lead me to a car park a couple of blocks down the street where I could leave the bike for the night. He the took me to his flat, a small apartment in one of those big, gray, crumbling soviet blocks of flats, for the complete Ukrainian experience. He was the most wonderful host, prepared a very nice dinner for me and then we tried to overcome the language barrier and talked about the trip and motorbikes. He told me that he had had one in the past, and that was something we could chat about with very few words, watching the twilight sky from his balcony. 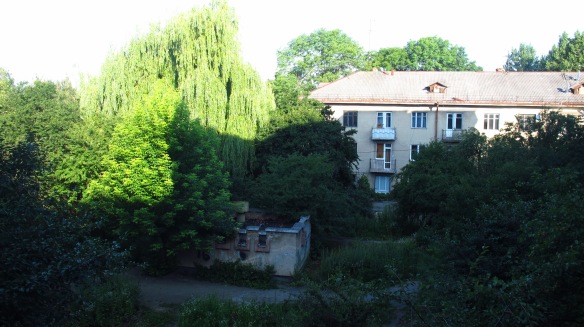