I got up late today and had another shower before setting off, I wanted to experience what comfort my room had to offer, as I was not going to get any for the next 48 hours. I was going to spend the night in a ferry crossing the Ionian Sea from Igoumenitsa to Brindisi, and I had not booked a cabin. The second reason for getting up late, aside from being tired from the long ride the previous day, was that the ferry was leaving at 22:00, so I had all day to cover the almost 500km that separated me from the port. No hurry.

The ride up the western coast of the Peloponnese was a lot less interesting than the east coast. The road to Patras, while not a motorway, was a more important one than the small roads I had been riding on the day before, so there was not much to see. I imagine that the best idea for this leg of the journey would have been to cut across the centre of the peninsula and ride across the mountains, but I did not have time or energy for another mega ride.

What little motorway I found near Patras was free, I only had to pay for the bridge that links the townships of Rio, on the outskirts of Patras, and Antirrio, on the other side of Gulf of Corinth. I was expecting a normal road bridge built on concrete pillars but instead I found a masterpiece of engineering. The bridge, called Charilaos Trikoupis Bridge, is the longest fully suspended bridge in the world, and is a sight to behold.

On the other side the road was more interesting, going up the hills again and inland for a while before becoming a motorway. I was in good time, so when I got to Amphilochia, on the shore of the Ambracian gulf, I decided to go around it on the west side to do some sightseeing instead of going straight north towards the motorway to Igoumenitsa. I stopped for some late lunch in Amphilochia (an excellent gyros), which was a rather beautiful town, and then took a very interesting road. 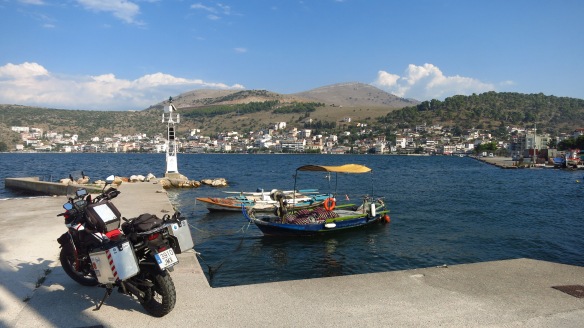 The Ambracian gulf could be a lake if it were not connected to the sea by a narrow opening, and I was enjoying the views from a straight bit of road with no traffic when, after returning my attention to the road, encountered a sight in my rear view mirrors that might be familiar to drivers all over the world – the four rings of an Audi nose two millimetres from my arse. I don’t know why the guy had not overtaken me, but hate people who tailgate, so I decided to put some distance between us. There were a series of ascending fast corners starting right there, so the guy quickly disappeared from view without me having to ride particularly fast.

You remember I said that Greek drivers are very bitter about being overtaken – well, Mr. Audi was no exception (although I had not overtaken him) and he moment the road was level and straight again, I saw him appear in the distance going as fast as he could to catch up. I would have let him pass, but by the time he got close the road was twisty again, and he had completely disappeared again.

Statistics usually give Ukraine and Albania as the countries with the most dangerous roads in Europe, at least measured by the number of deaths on the road. Having travelled on both countries by motorbike, I did not find that drivers were particularly aggressive or reckless, but they are cursed with some of the worst roads I have ever seen, made worse by the fact that wandering animals of all sizes, kids, horse carts, bicycles and lots of other things that should not be on the road are everywhere. Italians also have a bad reputation, and yes, I can confirm that they drive very fast, but most of them are excellent drivers and know what they are doing. Greece, however, is a different matter. The roads are no excuse here, they are generally good, the problem are the drivers. First, they just have no respect for any traffic rule or their own lives. They are a compendium of all possible wrong conducts on the road. Mobile phones, no helmets on the motorbikes, zero use of indicators, pulling out whenever they feel like it without checking the road, and a long etcetera. I have never had so many near misses as in Greece, and I have ridden a bike in Albania, Ukraine, Russia and Kazakhstan. Second, they are essentially shit drivers, and this guy in the Audi was no exception. Any idiot can bury their foot on the accelerator on a straight line, but you need to know how to drive to take a car round a corner and keep the pace, and believe me, I did not find a single driver who seemed to be able to do it in Greece. And third, as I said, they seem to be very proud.

So, back to our friend in the Audi – I was bored, and just to annoy him I started waiting for him in the straights, letting him catch up and then disappearing in the corners. I guess he got quite mad. When I got tired I just resumed my normal cruising speed and soon I was at the narrow mouth of the gulf, where I did not find a bridge, as I was expecting, but an underwater tunnel, very similar to the one that connects mainland Norway to the island where the Nordkapp is.

After that, the road became tedious and unremarkable again until the last bit before Igoumenitsa, where it followed the coast for a while and then connected to the last bit of motorway coming from inland, where it made a prolonged descent through the hills and straight to the port.

This was an important port, and as such a very busy one. I followed the signs to the terminal building and found myself in what looked like a refugee camp. The car park was complete chaos, it was full and there were cars parked in the middle of the alleys blocking the way, there were people with bags, cases, big bundles of clothes and cardboard boxes everywhere, some sitting, some lying on the floor sleeping. I reluctantly left the bike as close to the front door as I could, removed the tank bag and went into the building to try and exchange my reservation for a ticket.

The inside of the building was no better, it was packed full of people queueing to get tickets, to go through passport and security checks, etc. I looked around but there was no counter with the name of my ferry company, European Seaways. I went to ask at the closest thing, a counter marked European Management Maritime Company, because the name was similar and they were the only ones without an endless queue at the moment. I gave my reservation sheet to a girl who looked like Kate Winslet doing the most boring job on Earth and asked if they were the company I was looking for. She glanced at the printed paper for a millisecond, gave it back to me without looking at me and said ‘not here’. I asked her whether she knew where it was and she replied ‘no’ still without peeling her eyes off the computer screen. Well, thank you… I went to the only other desk without a queue, at the other end of the hall, and a much more helpful girl told me that it was indeed the company I had just been to, EMMC. I went back to my friend there, told her I had specifically been directed there and she just repeated ‘not here’. Well, if anyone from EMMC happens to read this, know that you have a shitty employee at your desk in Igoumenitsa and tell HR that she would be better employed in the back office, where she would not have the bother of having to deal with actual people. To load shipping containers, for example.

In the end it was a guy from a cargo company who told me that the Europan Seaways offices were not in the terminal building, but across the road, and they were not even marked as European Seaways but something else entirely different. Great.

I had been running up and down wearing all the riding gear and carrying the tank bag and the helmet, so by the time I walked into their office I was soaked in sweat, impatient and nervous about having left my bike unsupervised at the terminal. I saw that there were only a couple with kids in front of me and that they were already being given their tickets, ‘wonderful’ I thought, ‘no queue’, but unfortunately they belonged to that species that are not happy with simple information until it has been repeated to them about a hundred times, so after several minutes of ‘Pier 13?’ ‘Yes, pier 13, at the end of the port’ ‘At the end?’ ‘Yes, straight on until the end’ ‘Number 13?’ ‘Yes ma’am, pier 13’ ‘At the end of the port?’ ‘Yes, at the end’ ‘We board there?’ ‘Yes, your ship is in pier 13’ ‘Pier 13?’, etc. etc. etc. I was ready to kill the whole family, chop them to pieces and throw them off pier 13. 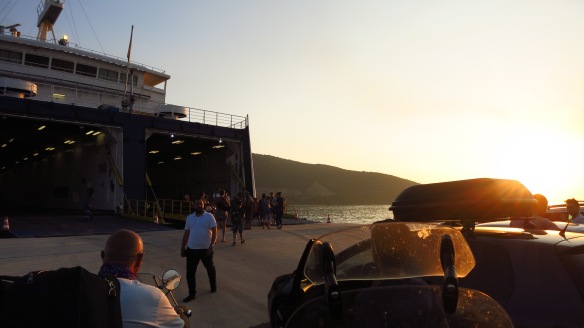 I had arrived early to the port, but by the time I got my tickets it was already boarding time. Not willing to waste a minute more behind people for whom simple information is a challenge, I got on the bike and shamelessly skipped every queue I found – to get out of the car park, to enter the docks area, to go through security control and to board the ship. I was the second vehicle to get on (behind another motorbike), parked the bike and went to find myself a place to put down my sleeping mat.

Unlike the Grimaldi ferry, where the air conditioning is usually set at about 5ºC, there was no air conditioning at all in this one. By the time we set off dozens of other people had camped on every flat surface on every deck, and it was unbearably hot. I decided to leave my sleeping mat there and went to the upper deck to get some air and see the port slowly disappear in the night. Bye-bye Greece, I’m glad to have survived your roads but I’m afraid I won’t miss you much.