So, time to get the rim repaired! I thought it would be a good opportunity for some Top Gear-style useful consumer advice. Where is it easier to have a rim fixed? In Astrakhan, a 500,000-inhabitant city in the Volga delta I was completely unfamiliar with and with a language I did not speak, or in Barcelona, my hometown? Let’s compare experiences!

Finding a workshop that would repair the rim proved to be a lot easier than in Astrakhan. I just had to Google it, check out some opinions on bikers forums and choose one. In Astrakhan I had to wander round the centre until I found a biker gang, enlist the help of one of its members, Arkan, and trust he would know what he was doing because he did not speak a single word of English. So, the first point goes to Barcelona.

I contacted XR Llantas, which build and repair wheels of all kinds, both for individuals and competition teams. They have a very good reputation and trusted they could do a proper job.

I sent them pictures of the damage to the rim to see whether it was repairable or not. They said that they needed to see the rim to confirm, but it looked possible. Once I had removed the tire from the rim, I took it to their workshop in Barcelona on a Monday morning.

The place was smaller than I expected,there were rims of all kinds in every available inch of space in the shop, but it seemed they clearly knew their business. I gave the rim to a guy who inspected it carefully and said that they would need to carry out some tests (he mentioned infrared light and ultrasound) to see if they could repair it. Compared to the junkyard Arkan took me to in Astrakhan, this looked like a NASA lab, so Barcelona 2 – Astrakhan 0. 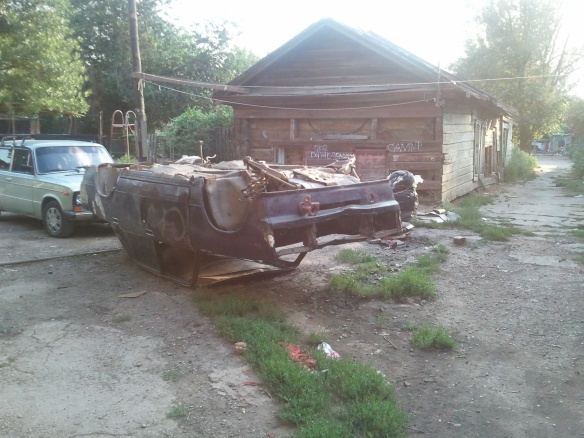 They said that they were very busy and would not be able to get it done until at least Thursday.  I was using the AT in the meantime, so it sounded reasonable to me. At least I was not stuck in the stifling heat of summer in Astrakhan.

A  week later I still had not had any news from them, so I called. They mentioned that they had started looking at it, but had had to stop because they had more urgent business. The guy I talked to on the phone was not the one in the workshop apparently, but he said that he thought that the wheel would be ready the following day, and that they would call to confirm. That was eight days, while in Astrakhan it only took from Monday to Friday morning. Barcelona 2 – Astrakhan 1.

Tuesday came and went with no news, and I was too busy with classes to call. Back in Astrakhan Arkan had called when we said he would. Barcelona 2 – Astrakhan 2.

I called the shop on Wednesday morning and the guy on the phone sounded surprised that they had not called me the day before, as he thought the rim was already repaired. He promised to talk to the workshop and call me later.

Half an hour later I got the promised phone call, but not with the news I was expecting. They had run their tests and determined that he wheel was too badly dented and bending it back into shape would weaken the aluminium too much and there was a risk that it might crack and cause an accident. So, it was not repairable. In Astrakhan they took a wheel in much worse shape than this one, fixed it with no objections in four days and it remained usable for two more years and thousands of kilometres, after which it developed a microscopic leak and I had to have replaced. Barcelona 2 – Astrakhan 3.

There you go, then – if you want something fixed, get a Russian mechanic to do it.