18th of January, first day of the Africa Twin week in the Honda dealers in my country. It is 9:30 in the morning and below me Barcelona has shaken off the last shreds of morning mist. The months long wait has been worth it: I am very likely to be the first regular customer who has the chance to take the new AT for a spin. 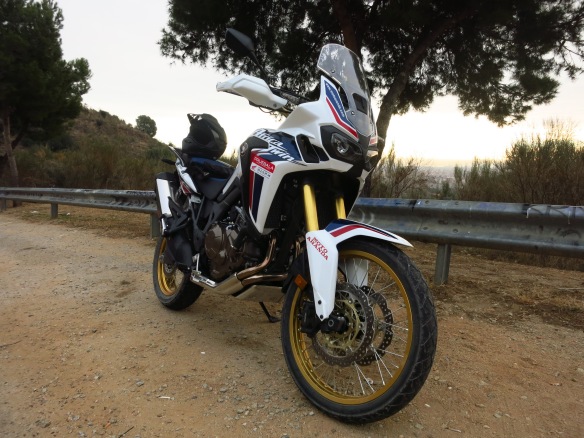 When this bike was Little more than a mud covered prototype with a camouflage paint scheme I swapped my indestructible V-Strom for a Super Ténéré because I came across a bargain I could not miss, but as the months went by and more information trickled to the press about the 21st century incarnation of the legendary Africa Twin I could not help but wonder if that was the perfect motorbike I was looking for.

Months later the prototype became the CRF 1000 L Africa Twin. As technical specs were confirmed, so grew the expectation, and not just mine, specialised media and adventure bikers all over the world were looking forward to getting their hands on one.

It was around then than my mint condition Super Ténéré was stolen. Luckily, the insurance company delivered on their promises (these are the times when you realise how important a good insurance policy is), and by the time the date of arrival of the AT to the dealers had been set in January I was faced with a dilemma: should I try to find another good deal on an almost new Super Ténéré or wait, save and go for an AT?

When I was looking to replace the V-Strom a strong candidate was the Triumph Tiger 800 XC. On paper, it was the perfect bike, but when I tested it I was disappointed. We did not get on well. Before making a decision it was essential that I tried an AT in the metal.

I surfed the net almost constantly for a couple more months, gathering all the details I could find about it, the official presentation took place in South Africa, the press fell in love with it and I was more and more anxious to sample one, until at long last the arrival of the first test units was announced. As soon as I could, I dropped by Honda Control 94, in Aragó street, were the sales man told me to call him the following week. Meh. The next dealer was Honda Moto Aranda in Pau Clarís street, where pulled out a schedule immediately and asked me ‘when do you want to test it?’. Marvellous.

Back to the present. I have arrived at the dealer at 9 o’clock and I have finally been able to see it person. Impressive. It is a gorgeous bike, well proportioned, tall, sleek. The one on static display is matt black, and even though I love that colour, I was not very convinced when I saw it in pictures. Big mistake. In the metal it looks great.

The test bike is painted in the classic AT colours – pearl white, red and blue, with golden rims and handlebar. Even if the black one is beautiful, it is easy to foresee most customers going for this paint scheme. It brings out the bike’s details and shows its heritage.

After a short explanation on how the dashboard works (lots of info), it is time to fire it up and go for a ride. The engine has a very attractive sound, the 270-degree crank gives it a special sound and unlike the Super Ténéré the exhaust has a throatier, deeper note. There will soon be third-party options, but the standard pipe sounds wonderful.

I put the bike in gear (the test unit is the ABS and HSTC model, but without the auto box) and I joint the rush hour traffic in Barcelona. This is throwing her in at the deep end – nothing reveals how tractable (or not) a bike is like riding in these conditions. First impressions are a list of positive points – the gearbox is smooth as silk, the clutch, which despite being cable-operated offers no resistance and can be depressed with one finger, is progressive and together with plenty of low-down grunt the bike is ridiculously easy to use in the city. The handlebars are wide but high, so it is above most cars’ mirrors, and it has an excellent turning circle, which helps a lot when zigzagging between stopped cars.

Thousands of red lights before reaching the road that connects Horta with Cerdanyola through Collserola give me the opportunity to study the dash and the riding position in detail. This bike could have been tailor-made for me. The riding position is upright, natural, with high handlebars that put zero strain on the wrists or the back. With the standard seat in its lowest position I can easily reach the ground, resting both feet on the soles and with my knees bent. I could set it to the highest position and I would still be able to move the bike around without problems (I’m 1,84). The fact that it is a narrow bike where the tank meets the seat makes it feel smaller and lighter than it really is, after five minutes of first getting on it you feel comfortable and confident. It is a bike that makes things easy for you. It is also very easy to ride standing on the footpegs, although I would fit some raisers if I had to ride like this for long distances. A few grannies were surprised to see me looking at them at eye level from their seat on the bus.

The dash offers a lot of information, but Honda has managed to make it very easy to navigate the various displays without letting go of the bars thanks to the buttons on the left handlebar and, most importantly for me, traction control and ABS can be adjusted or disconnected with dedicated buttons without having to stop the bike, forget about having to dig into menus, reset things or pressing combinations of buttons. Simple and easy.

Indicated fuel consumption in very heavy traffic for the first three and a half kilometres has been about 29mpg. After the initial shock and leaving the worst of traffic behind, the rest of the ride through the city and up the starting point of the BV-1415 road yields a more reasonable 50mpg.

On the open road, and with no other cars sharing it with me, the AT is a pleasure to ride. Yes, the engine only produces 95hp, but let me make it clear here and now that you can forget about figures. It is a very torquey unit that pulls strongly in any gear and it sounds great too. At no point do you think ‘it could do with 30 more hp.’ If you really need more, you might be riding the wrong kind of bike, and in any case, all the more powerful models have offroad modes that limit power to these figures to keep things under control in the dirt, so… why more?

Not only is the engine delightfully smooth and vibration-free, it is also perfectly mated to the chasis. I have not altered the suspension settings from what they were at the dealer, and it is an effective setup, but one of the best things about this bike is that in comes with first-class suspension as standard, with all the regulations you need to set up the bike according to your preferences if you know what you are doing. It does not have electronic suspension. So what? It does not need it? A well set up suspension does not need constant adjustment, and those who will take this bike to the places it has been designed to go do not want to risk a faulty servo motor in the middle of nowhere… Adjusting preload with a screwdriver is 100% reliable.

As for spirited riding, high speed cornering is stable and precise, and its agility is at an incredible level. I do not know what Honda have done with this bike, but as I am writing these lines I still find it hard to believe that a bike with a 21” front wheel turns into corners more keenly than my other two bikes, both with 19 inchers. You do not have to coax the bike into turning or changing direction, it just flows from one corner to the next, surprisingly good fun. Obviously, I do not have the time to get to know the bike and its limits, but I have the feeling it give a lot more than what I am asking for today.

After the city and the winding road, it is time to make it back on the motorway to see how well it manages airflow and how the engine feels at cruise speed. Despite this unit having the standard low screen, above 120km/h the wind is clean and free of turbulence, it is clear that they have done a good aero job on the bike. I would personally fit the taller screen or maybe a wind deflector if you are going to ride often on the motorway, though. At an indicated 130km/h the engine is turning at about 4,000rpm, so you can keep up a good cruising speed without much noise or vibrations, and with power to spare. The best thing? An average 58mpg.

With about 40 minutes left on the bike there is one last thing I want to try… How does it work in the dirt? With not much time left (I had to get back to the city centre to return the bike) and not wanting to get into trouble (the tires are road-biased and after all it is not my bike) I manage to find a dirt road in good condition and try it out.

Like the Super Ténéré, the ABS system is very well set up and can stop the bike without much trouble in hard-packed dirt. Still the system can be switched off in the front wheel for those who want to get more serious off road. Traction control has three levels of intervention and it can also be switched off altogether, although in the most permissive setting it allows you to play hooligan before cutting in to help. Again, off road mode for offroad heroes.

On sand and gravel the bike is confidence inspiring. It feels very light, which makes it easy to correct any slide or mistake, and when I reached the end of the dirt road I feel comfortable enough with it to cross a couple of those ruts dug by rain erosion. As a witness to how easy this bike is, when I tested the Super Ténéré (also on road tires) before buying it I did not feel brave enough to venture even into an easy dirt road, the weight demanded respect. With this one, however, I feel capable of tackling more complicated terrain far from tarmac on my own. The weight is low and centralised, which makes the bike easy to control and I imagine that in case of a fall, if I am able to lift my V-Strom when loaded, the AT cannot be much harder.

On the way back to the city centre traffic is much better and riding at 80-90 km/h on the ring road the bike manages an impressive (always indicated) 74 mpg.

Once at the dealer, the next customer is already at the door, helmet in hand, waiting for the bike to come back so that he can have a go too. It looks as if it is going to be a busy week for her…

There are as many kinds of bikes as riders, and I imagine that some people will be quite indifferent to the Africa Twin. As for me and what I do with my bike, the best verdict I can give is that this bike seems to have been tailor-made for me. Simply perfect.