I had set my alarm clock for 6:30 to make an early start and avoid the hottest hours of the day as far as possible, but I needn’t have. At 6:00 sharp a rooster woke us all up, and kept singing at the top his lungs for at least half an hour more. I enjoyed breakfast in the company of donkeys and while was taking the tent down I saw that two terraces up from where I was there were some cages with rabbits. This was indeed a farm.

The road down to Sospel was delightful, a series of hairpins built on the rocky sides of the Gorges du Piaon, empty this early in the morning, as was the road to Col de Castillon, which I reached through the old road, as the new one crosses the hills via a tunnel lower in the valley. 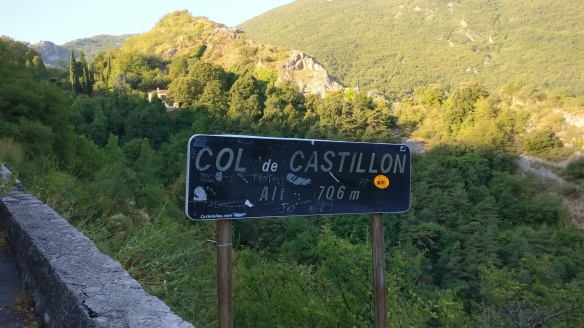 While riding out of one of the last hairpins before the coast I saw an old stone viaduct that stuck out away from the road and described a long curve above the valley before turning into the mountain again. It was an impressive sight, and as I rode closer I saw that it had no rails on it and a fence blocked access to it where it met the road. It was part of an old railway line that connected Menton on the coast to the town of Sospel, and the reason that the viaduct stuck out so far from the road at that point was not to allow for a wider radius of the corner, as I had thought, but to be able to easily and effectively destroy it with explosives in case of war, rendering the line useless to the enemy.

A few kilometres down, the road reached Menton, marking the end of my trip along the French Alps. There was only one more col on the map, Col d’Eze, on the coast road between Monaco and Nice – with most traffic on the motorway, the road was quiet and offered me great views of the Mediterranean with Monaco at my feet.

After conquering the last col I filled up, selected a good playlist on the iPod and got ready for the 700-kilometre slog back home on the motorway. The offroad tires do not like high speeds and I wanted to save fuel, so I took things easy and two fuel stops later I was in the outskirts of Barcelona.

The heat had been bearable, never going above 31ºC, and I was looking forward to a shower and a beer when suddenly all traffic came to a complete halt. Even though it was the end of the day rush hour I was not expecting problems, as most people had already gone on holiday, but it was total gridlock at the entrance of the city, and then I remembered that some genius in city planning had decided to green light roadworks on two major ways into the city at the same time, leaving no alternative for the traffic going into Barcelona, one of them a new bus lane that no one had asked for and no one needed. Some lanes were cut, others made narrower, so there was no space for me, carrying the aluminium boxes to filter through the traffic, so I sat in the sweltering heat for almost an hour while all the traffic entered the city through a single lane. When I got home, another surprise was waiting for me – the building owners had decided to replace the lift, and the work was scheduled from just after the day I left until the 23rd of August, leaving me to carry all the luggage up the stairs dressed like Robocop, swearing and sweating.

When I managed to peel myself off the suit I had a shower, opened a cold IPA and went to kiss my much-missed bed.