I got up refreshed from a great night sleep in the luxury yurt, but the same could not be said for Marc. He had got up four times over the night to visit the toilet, and things did not seem to be improving.

During breakfast the camp manager kept insisting that we tried the sauna, as he had been doing the night before, but we wanted to leave as soon as possible to do the remaining six kilometres to Tash Rabat and see the caravanserai.

A caravanserai was a sort of inn where caravans could spend the night and rest on the Silk Route. At 3200 metres, Tash Rabat was the last building before reaching the Touragart pass and the border into China and even though it dates from the 15th century as a caravanserai, some studies suggest it might have been built as early as the 10th century as a monastery. It is one of the best preserved examples of this kind of buildings, and it is amazing to think how hard it must have been to build this enormous structure with 31 chambers up here.

After finishing the visit, we had two options for our next route – the main road went back to Naryn to the northeast, and then headed west to Kazarman, our overnight stop before Osh, which was quite a detour, or there was a shortcut straight north through the mountains to meet the Naryn-Osh road in Baetov which we had been told had amazing views but could be challenging if the weather had been bad recently.

In dark red, the route that goes through Naryn. In green, the shortcut through the mountains. The marker on the left is Kazarman. From that point to where the green route joins the red route there are 160km!

Marc delayed making a decision on the routes until he had had another visit to the toilet in the yurt camp on the way down, and the decision was made for him. When he reached the yurt camp he saw that his front tire was damaged from riding witout air and then having it on and off the rim as we tried to get a tube in it, and it had deformed, letting the tube (which, miraculously was undamaged) pop out of the tire on one side.

There was nothing we could do at that point, other than try to get a new tire, but there are no big bikes in this country, so the only place where we could do that was Osh, two days away via two mountain passes.

The decision was made that Marc would leave his bike at the yurt camp and the manager would keep an eye on it, and I would take the wheel and ride to Osh with Katja to have a new tire fitted. Marc would hitch a ride down to Naryn and have at least four days to get better. 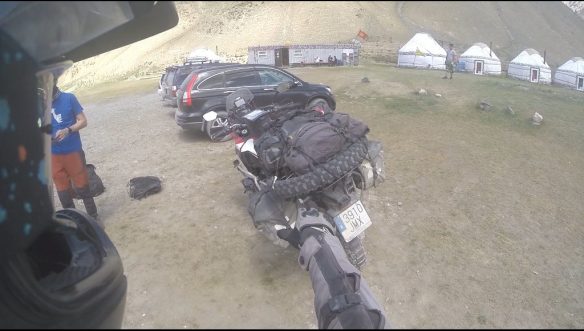 By the time we left it was already 2 o’clock in the afternoon, so we took the route across the mountains to Baetov. What a route! It was the most beautiful track I had done so far – 90 kilometres of remote mountain regions and good dirt tracks with some easy river crossings.

As we approached Baetov I undestood why we had been told this was a difficult route in bad weather. The rivers we went across were almost dry, but the riverbeds were very wide, so it must be impossible to cross them it is has been raining, and the last kilometres to Baetov look to be a mud nightmare if it is wet. 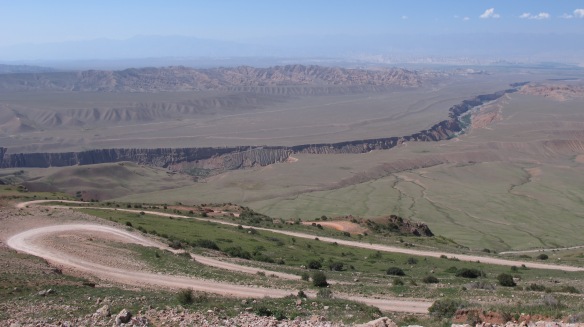 Once on the main road, I set my GPS to Kazarman and saw that we still had about 160 kilometres to go. We were optimistic that we would make it in good time before the sun set, but then we realised that all of those 160 kilimetres were off road and we had a mountain pass to cross.

We pushed on nevertheless, and when we were about 40 kilometres from our destination, disaster struck.

I turned a corner and found myself riding uphill with the setting sun directly in front of me, I was blinded for an instant, but it was enough to ride into a deep pile of gravel. The bike slid sideways to the right and before I could correct it, both wheels dug in, it flipped, threw me over and I landed on my back.

I lay on the ground for a few seconds, checking that I could move arms and legs, got up and cut power to the bike. The left side of my ribcage hurt, but it was not too bad, but when I tried to lift my left arm I felt a flash of pain at the base of the shoulderblade. I was afraid something might be broken or at least cracked in that area.

There was no way I could lift the bike in that condition, so I just removed my helmet, collected the cameras, which had both broken off their supports, sat by the side of the road and waited for Katja to realise I was no longer behind her and turn back.

We put the bike back up and checked for damage – it had landed on the upper part of the left front panel and that was scratched and cracked, the windscreen support was also bent to the left, which sucks because it is part of the fairing stay, and there were other bits and pieces of plastic broke around the indicator area. The indicator itself had miraculously survived, as had the handlebar, clutch lever, mirror, gear pedal, and all other important bits. Suspension and front brake were also intact, and at the back the chain had come off, but I could put back on rotating the wheel, so that was fine. 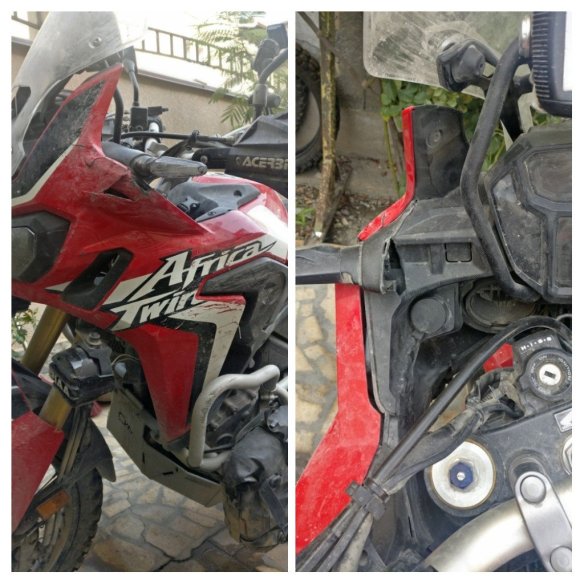 I got on the bike and saw that in the riding position my back did not hurt too much, so I could probably make it to Kazarman, which was the only town near.

We got there just after sunset, found a CBT homestay, I took some painkillers and fell sleep immediately.