‘Not many reach the summit, since the road is most likely to be covered in snow’.

‘Some hard parts, which make you wonder whether to continue’.

‘The highest you can go on a motor vehicle in Europe’.

These are some of the comments I had found online about the route to Pointe Sommeiller when I was planning the trip. It was a challenging road to face alone, but I was feeling up for it after the previous day’s routes and somehow, I felt I could not leave the area without at least trying to complete one of the legendary mountain routes in the region.

This mountain road was opened in 1962, not as a military road, since it is a dead-end road that does not connect to the French side and there are no fortifications, but as the access to build a ski resort. The project was abandoned in 1980, but the road has remained open.

The route starts at the same point as the Fréjus tunnel, just past the town of Bardonecchia. The first section leading up to the hamlet of Rochemolles is paved, but that does not make it any easier. It is an extremely narrow road through the forest with some of the tightest and steepest hairpins I have ever seen. Past Rochemolles the gravel section starts, and for the most part it is not a difficult road – there are a few tight hairpins, but the surface is good enough for all kinds of cars to be able to drive it. The forest starts clearing by the time the road reaches the Lago di Rochemolles, a dam halfway up the valley. The section of the road that goes to the end valley is the easiest, gaining altitude very gently until it reaches a car park and a small wooden hut that marks the beginning of the complicated part. 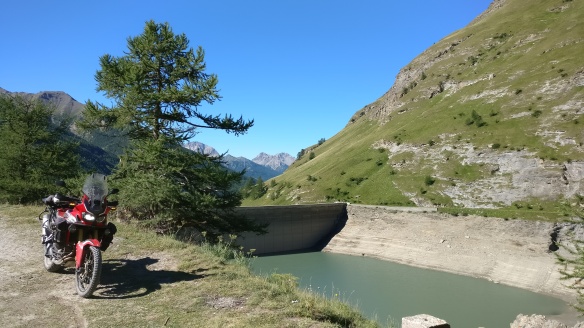 A girl in the hut told me that you have to pay a five-euro toll to access the remainder of the route, a measure I found reasonable to keep traffic in check and the road maintained and open as a tourist road. She also made sure that not unsuitable vehicles made it past that point, as this was where things start to get complicated – the first section are a series of very tight hairpins with some loose rocks and the occasional rut right where you don’t want it. After that, there is a long plateau where the road levels off and the surface becomes smoother, and the first patches of snow make their appearance. 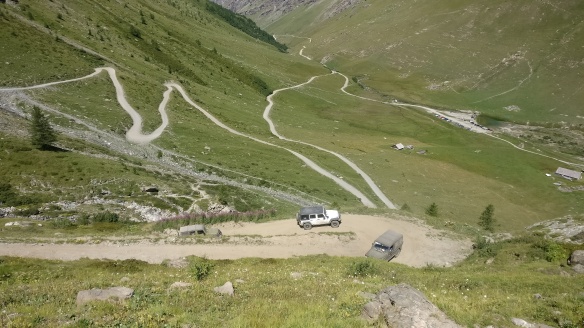 At the end of the plateau, things get complicated again. The road climbs the last few hundred metres on very rocky terrain, which made my bike jump around like crazy. I remembered some advice from the German riders I had met the day before at Forte Jafferau and stopped to let some air out of the tires. It made a world of difference – the bike was now a lot more controllable, going exactly where I wanted it to go and not jumping at all. 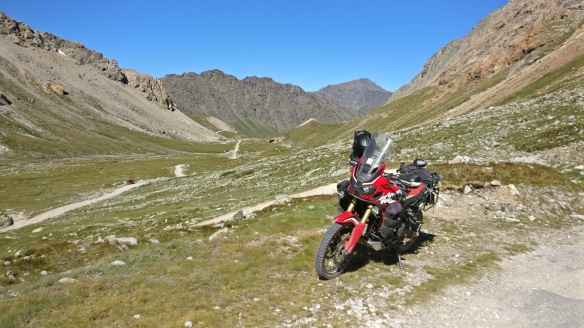 A couple of hairpins later I reached the end of the road, a flat empty space that a wooden fence separated from the lake at the top of the pass. To my right, Glacier du Sommellier, which supplied the water to the lake. 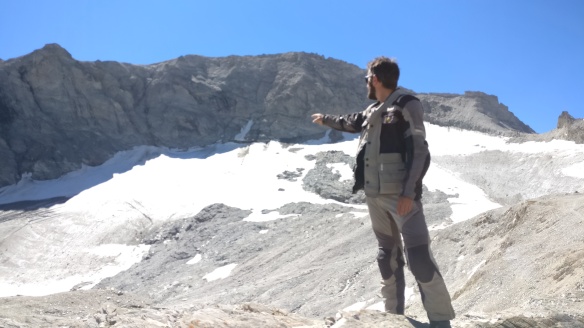 I walked past the wooden fence and found a guy on a GS by the lake who was packing up his things. I approached him and he told me that he had spent the night up there, an amazing experience! 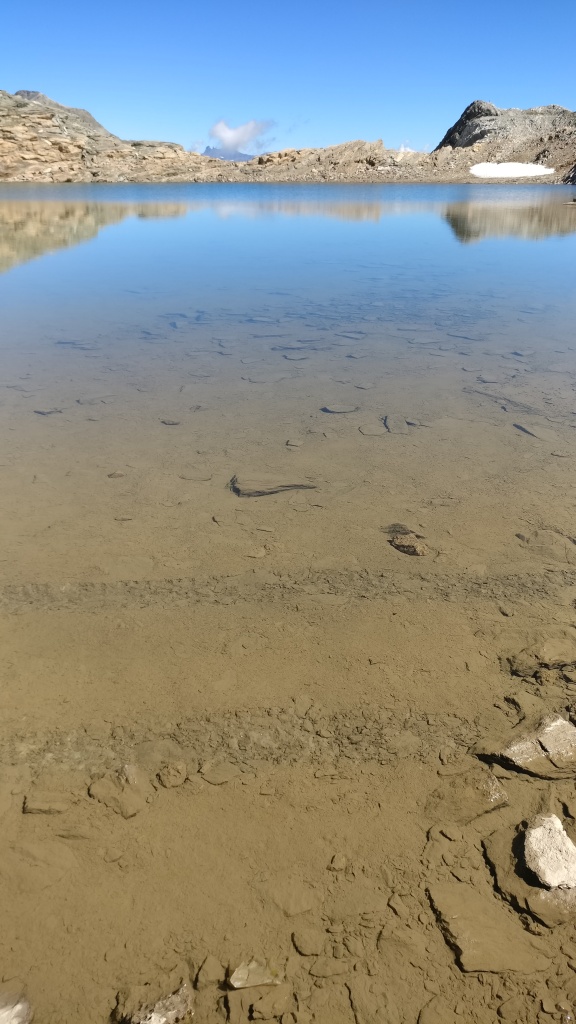 The only other vehicles at the top were hardcore 4x4s, but there was one that drew my attention. Against all odds, a Dutch family had made it all the way up there in a California campervan! Mind you, it was a 4WD Syncro version and they had fitted it with BF Goodrich offroad tires, but it was still surprising to see that up there. 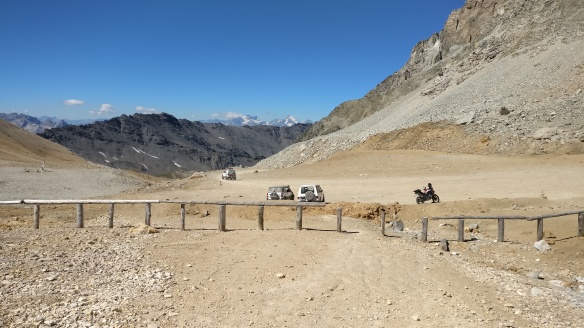 The way down was easier than I anticipated, or maybe I was just feeling more confident after the white-knuckle descent from Forte Jafferau through the ski slopes the day before. In any case, the only real difficulty was that by the time I was going down there was more traffic coming up, so I had to be careful, as there was not a lot of space on the road. Halfway down the hairpins on the last section I saw a long line of Jeep Wranglers coming up, so I pulled over to have a rest and let them pass while I took some pictures rather than risk running into them in some tight corner.

Once at the bottom of the valley the rest of the descent offered little to no difficulty, the main risk here being the number of people who drive up this easy part of the road to the mountain hut, some of them a bit too fast and taking up all the space on the road.

When I finished, I took out my compressor and inflated the tires back to their road pressures before heading for the second route of the day – the Tunnel du Parpillon.

I had to make it back to Briançon and then south on the main road to the village of Mountdaufin, where a smaller road leads past the village of Guillestre and up the col de Vars, a route that I was also going to take the following day as part of the Route des Grandes Alpes. At the bottom of the valley on the other side of the pass the village of La Condamine-Châtelard marks the beginning of the D29 alpine road, the track that goes all the way up to tunnel du Parpillon, at 2,637m.

The road and the tunnel connect the valley of Ubaye with Embrun and it was built by the French army in 1891, as the pass was considered of strategic importance. It has been closed to traffic several times over the years, but some of the people I had met in forte Jafferau the day before had just ridden through it, so I did not think I would have any problems. The route I was taking, more or less from south to north was the route that most bikers recommended as the ascent from this side was more challenging, meaning that there would be no traffic other than mountain bikers and the odd motorbike or 4×4 – like the last section of the Sommeiller, this was not a route anybody should attempt in a regular car.

When I turned off the main road I saw a sign reading ‘Tunnel du Parpillon FERMÉ’. My French is much better than my Italian, so I got this one without problems, but since I had recent reports that it was open, I just ignored it and went on. There was at least one more sign like that before the road turned to a dirt track, so I stopped when I saw a group of cyclists putting their bikes back into their cars and asked them about the tunnel. It was open, they confirmed, they had just ridden through it. They also told me that it was very wet. Well, well…

The way up was at some points comparable to the Pointe Sommeiller – very rocky, steep, with tight hairpins. Good thing that there were signs at the bottom warning that the road was not suitable for cars. 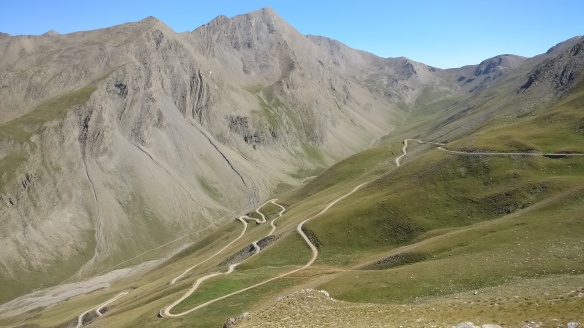 Halfway up I spotted a vehicle coming down. It has C-shaped DRLs on the bumper, so at first I thought it was a facelifted Renault Captur and thought to myself that it was one brave driver to take a front wheel drive SUV on road tires on a road like that, but when I got closer I realised, to my surprise, that it was a Passat GTE! A sports hybrid with very low ground clearance. If that were my own car, there would be no way on Earth I would put it to such punishment. I guessed they must have come up the other side, which was supposed to be much easier, crossed the tunnel and decided to continue down this valley. Bad idea.

A few corners later I reached the tunnel entrance. It was a narrow tunnel, with some old metal doors to close the entrance covered in old painting that read ‘circulation interdite’. It did not seem to be very ‘interdite’, as in a few minutes several 4x4s and motorbikes came out of it. 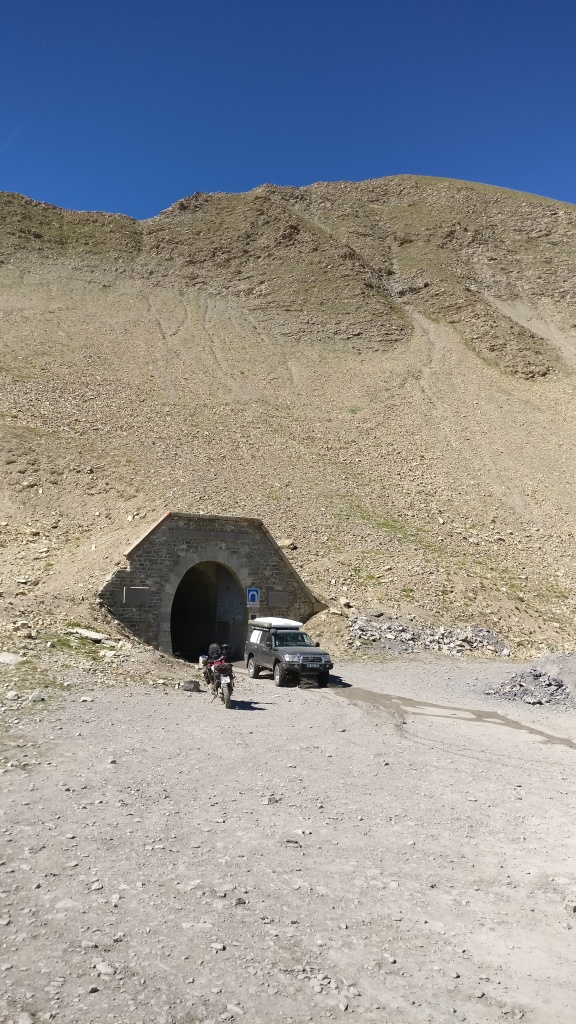 One of them, a Dutch guy on a GS1200 Adventure, stopped to take some pictures and I approached him to ask about the state of the tunnel and we started talking. He was travelling with his wife and they were staying in a house in Creveux, the first village down the valley. He left her there and come up to see if the road was easy enough to come up again with her as a passenger. It was the first GS1200 I had seen on the trip shod with proper offroad tires (TKC 80s) and going offroad. The guy was really nice, and since we were going in the same direction, he declared me his ‘friend for the next hour’ and offered to ride down together. 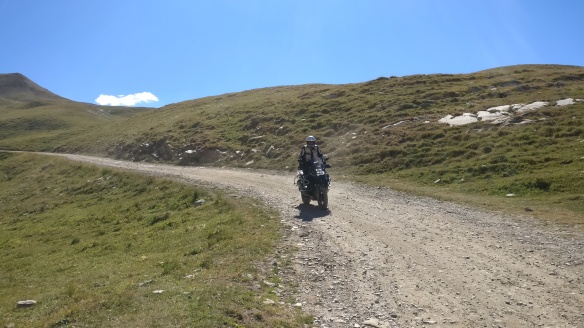 The tunnel was wide enough for just one car, so we waited to make sure nobody was coming the other way and rode into it. It was half a kilometre of very wet and muddy ground and total darkness, but my tires performed admirably and I had no problems.

Once out the other side and on the way down, I understood why the Catalans I had met the day before had insisted on doing the route this way – the views were much nicer on the way down on this side, with some imposing cliffs in front of us.

When we found tarmac again we stopped to exchange contacts so that we could send each other the videos we had shot while riding down, and he called his wife to tell her to get ready to ride up the tunnel with him and to order a couple of cold cokes for us, then invited me to follow him. I couldn’t refuse!

We relaxed and chatted for half an hour in the terrace of their guesthouse in the tiny village of Creveux, and as I was leaving for Briançon, they headed back up the tunnel.