As part of the preparations for the Christmas trip, this is a morning ride with Nat to test the winter gear on a route with many corners and great views this time of year.

The route starts in Castellar del Vallès, where we take the B-124 through Sant Llorenç i la Serra de l’Obac natural park. These roads combine lots of corners, great tarmac and excellent views which, together with their proximity to Barcelona and several other important towns, makes them a popular destination among riders and cyclists on weekends. Better take this part easy to prevent accidents.

The next bit, from Calders to Moià on the N-141c, is a flowing open road from where you might get the first glimpse of the Pyrenees if the day is clear and ride faster, but be careful, it is a favourite spot for the police to catch speeding bikers.

In Moià we leave the main road to take another remote back road, this time without traffic or cyclists, on the C-59 until the C-25 or Eix Transversal, which we only take for a few kilometres until the C-62 to Sant Bartomeu del Grau, where the route takes small roads again until Sant Agustí de Lluçanés. All this part of the route can be done on dirt tracks, which run more or less on the parallel area to the road, with even better landscape, as we did on this other route.

From Sant Agustí the road goes down to the C-17 in Sant Quirze de Besora. The cold test has been a success, and to celebrate it we ride up to the Hostal Serra de Llaers were we treat ourselves to some excellent butifarra and the local speciality, duck.

If you do not want to ride back the narrow road to Sant Quirze, the road (or sealed track) goes on past the restaurant until the outskirts of Ripoll. It is also possible to take a dirt track to the left a few kilometres after the Hostal that goes directly down to the C-17 (see the route mentioned earlier). 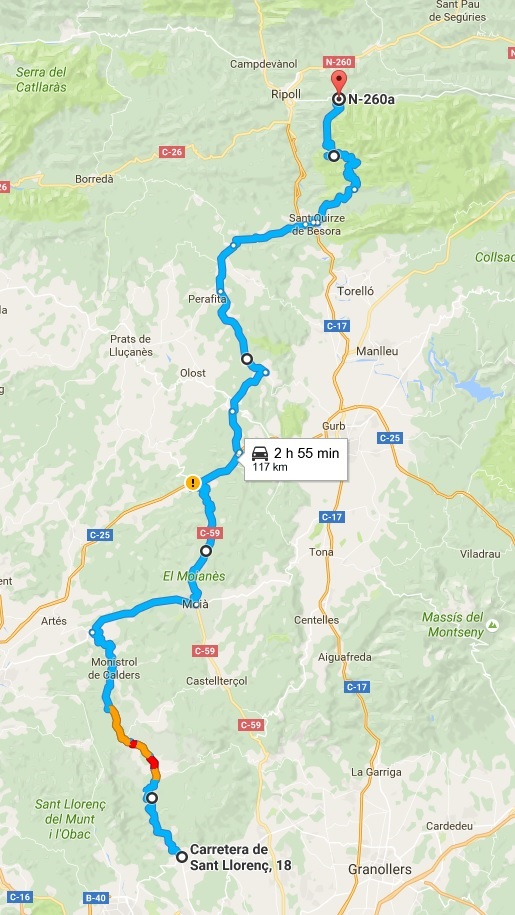 The Hostal Serra de Llaers is a farmhouse lost in the middle of the mountains, reached by 9km of narrow sealed track from Santa María de Besora. Another 9km go down to the N-260a road near Ripoll. The grilled meat is excellent, and duck is the house speciality, with great home made desserts to round off a great meal.