I had a long way to get to Athens today and was determined to avoid the motorway, where most traffic (and manic drivers) would be and see some nice landscape away from industrial states, factories, scrapyards and the general grimness that grows around big towns, so I plotted a route that would first take me as close to mount Olympus as it was possible to get without deviating from my final destination and then south through Larisa, Farsala, Lama, Thiva and, only at the very end, into the motorway for a few kilometres and to Athens.

It did not take long for the bad impressions of the day before to disappear – I filled the tank up in the first petrol station I found after Vergina (the one that the GPS indicated in front of the pension did exist, but was abandoned) and had a short chat, mostly based on hand gestures, with the old lady who owned the place about the country stickers on my bike. For most of the day the roads were really nice, with very little traffic, rising up into the mountains, descending into plains and cutting across the countryside. The only exceptions were, as expected, when I had to cross the few big towns on my route, but even that went better than expected, as they were smaller than I feared and traffic was light enough.

The weather had also been kind for most of the way, but in the end I could not escape the wind, which appeared about 150km from Athens and got so bad that, combined with the fatigue of a long day’s riding, gave me a headache. I stopped one last time to take an Ibuprofen and headed into Athens, wary of what I might find.

This was by far the biggest city I was riding into, the hotel I had found was near a main train station just north of the centre, and I was likely to encounter the worst of the end of the week rush hour.

The motorway turned into a ring road which I soon left following the directions on the GPS, and then it did not take more than a few traffic lights to reach the hotel. All in all, it had been a fuss free and easy entry into the city, for which I was very glad. I was surprised to see how many big motorbikes there were in the city, mostly Suzuki V-Stroms and Yamaha TDM 900s, the latter one usually a rare sight in Spain, and how very few people wore helmets. Was it not compulsory?

At the hotel they told me to park the bike right in front of the steps in the main door, where the receptionist, who was on duty 24 hours could see it, and insisted that I did not leave anything on it.

I still had some time left in the day after I had settled in my room, so I decided to go out to explore the neighbourhood and get some information for the following day. My sister and her husband were arriving very early in the morning on an overnight flight from Madrid, but we were not staying at the same hotel I was now – when we had booked ours they had no rooms for Friday, so I had had to find myself another one. The one for Saturday was just a few corners away, so I went to see if I could take my stuff there at 7:00 the following morning and whether there was somewhere to park the bike. 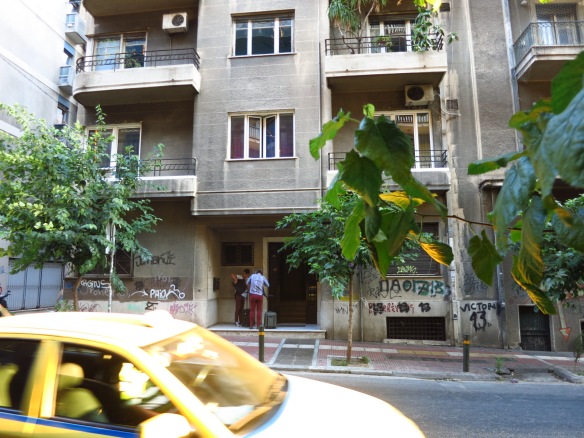 I walked all the way up the street and then down again and I could not find the bed and breakfast… it was not a long street, maybe seven or eight small blocks, and I had not taken the exact address with me, a mistake, I know, but I was expecting to find a sign of some kind in the building easily enough. It turned out to be no more than a small printed and laminated sign stuck on the wall next to a doorway, and I only saw it because there was a guy with a suitcase and a backpack standing in front of it waiting for the door to open. There was a doorbell in the sign, and after pressing the button a few times the owner came, not from inside the building, but walking up the street. It seemed they had two separate flats and the doorbell sounded wirelessly on the other one, the guy who was waiting told me that he had read we were supposed to ring once and wait for a few minutes. The B&B guy said that there was no problem regarding the following morning, and showed me a car park round the corner that would take the bike for 5 euros a day. From what I had seen so far in the street, that was a price I was more than willing to pay to have securely parked.

What little I had seen trying to find the B&B and what I saw later when I walked to the train station to find some information on bus and metro day passes left me rather shocked. This was not what I was expecting from a neighbourhood just to underground stops away from the centre of a EU capital city – the streets were filthy, the trees had not been pruned in a long time, I had to walk half hunched to avoid the branches, the plants and grass strips by the side of the streets were either dead or wildly overgrown, electrical boxes from street lighting were broken open, a surprisingly high number of storefronts were boarded up or just abandoned, their windows covered in graffiti or broken, there were whole empty derelict buildings, abandoned cars in the street… it was as if they had stopped caring for the city a long time ago. 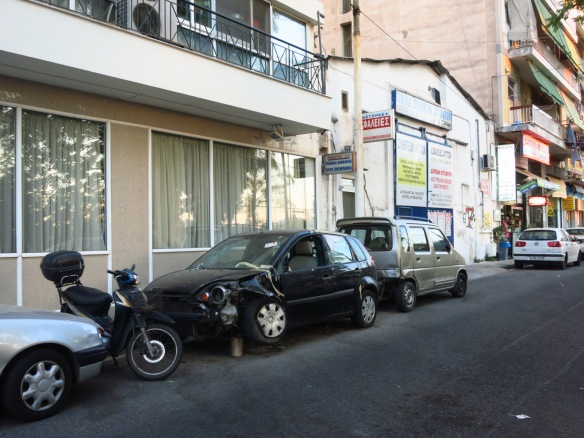 With all the info I needed for the following day, I went back to the hotel, wrote for a while and went early to bed – Saturday was going to be a long day with a very early start, and I was excited both to see my sister and her husband and to visit the Acropolis.