I had to work on Friday (last day!) and I was expecting to be able to get out quite early and start the route from the school instead of leaving on Saturday. I wanted to ride the Pyrenees from east to west in the strict sense of the word, and that meant starting from the easternmost point: El Cap de Creus.

I did not have as many days as I wanted, as my sister, who is living in Puerto Rico for a couple of years, was coming back on Wednesday night and we were to meet in Benasque – she had just turned 30 and she wanted to get together with me and my parents and climb a peak we had all climbed together when she was a toddler. I had worked out a route and a schedule, and if I wanted to have enough margin to make changes en route and take it easy enough to enjoy the views, I had to set off from El Cap de Creus on Saturday morning.

We were doing summer courses at my school that month, which meant working mornings only, and in my case, finishing class at 12:30 on Fridays. It looked like the perfect plan: pack everything on Thursday, ride to work in full gear, get changed there, do three hours of class and presto! I would be on holiday. Put on the gear again and by early afternoon I could be already camped somewhere near the beach and I would even have time to go for a swim.

Unfortunately, it was not to be. I also work as a Speaking examiner for Cambridge, and even though my students were taking the FCE at the school that same Friday, I was not supposed to examine them. However, since they were short of examiners and apparently it was OK for me to examine at my own centre if certain criteria were met, I was told that I would be examining… until 17:30.

All was not lost, though, there would be no swimming in the sea, but I still had time to get there before sunset, so on Thursday night I stayed up until late to pack all my stuff.

When I got up to work on Friday, it was pouring down with rain. Great. I put on my rain suit, and hoping the weather would improve by mid-afternoon, I headed for the school.

A few days earlier I had swapped my almost new Bridgestone Battlewings for a pair of Mitas E-07 with a view of maybe doing some forest roads on this trip. I had used Heidenaus K60 before and was very pleased with the results, but I wanted to test something new. These Mitas were really cheap, and if they worked well they could be a real bargain for my bike. I had read a fair share of positive opinions, but some people were not happy with their performance in the wet, and my mechanic was less than thrilled about them when they were delivered to his shop to be out on my bike.

I had been using them to commute to work for a few days and they seemed to be ok, but today was the first ride in the rain. The streets in Barcelona were flooded, and the bike felt a bit more nervous than usual. Then I got to a changing set of traffic lights and braked a bit harder than usual: the ABS came on very early on the back wheel and I was less than impressed with the breaking distance… Not a good strart for the tires, then. I would have to be extra careful in the wet.

Fortunately, by the time I had finished the exams it had stopped raining and the roads had even had time to dry up a bit, which was encouraging given how my first experience in rain with the new tires went.

Not wanting to pay the motorway, I took the same route I had taken a year earlier to start the big trip: heading for Vic on the C-17 and then east on the C-37, the A-26 and then the N-260. Nice roads, not a cent spent on tolls.

By the time I was near Figueres, I saw black clouds down the road and a rainbow, and I could clearly see a curtain of rain ahead. I should have stopped and put on the rain suit, but I figured my route went just along the edge of the rain and it was clear beyond, so I took the risk. Sure enough, in a few minutes it was pissing down on me. I ground my teeth an pushed on, as it was only a summer shower, hoping it would be over quick. It stopped a bit further down the road and by the time I reached Roses I was almost dry again.

I always say that the Costa Brava is a beautiful place, and it is, but riding into Roses I could not help but think of all the damage we have done to it in pursuit of the easy money tourists bring. I rode quickly past blocks of apartments, wine supermarkets, casinos and worse and took a beautiful winding road that quickly made me forget all that tackiness.

The road from Roses to Cadaqués is a glorious string of bends and twists that first goes up the hills, affording great views over the Golf de Roses and then drops towards the coast again in a succession of tight hairpins. My only complaint is that the two towns it connects are very much on the beaten track, and there is quite a lot of traffic for such a small road, somehow ruining an otherwise great riding experience. Fortunately, most drivers were considerate enough to slow down and let me pass then there was a bit of space. 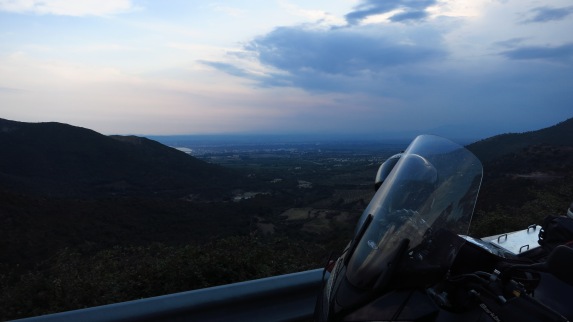 From Cadaqués an even smaller road made its way through a fascinating landscape of jagged rocks with the occasional glimpse of the sea. It was late afternoon, the sky was cloudy and the sun was low enough to shine below the cloud layer, giving the whole place an otherworldly look. Riding past the place where Salvador Dalí had his house, it is easy to imagine how this landscape inspired his work.

The road ended at the lighthouse that marks the easternmost point of the Pyrenees, and I was happy to see that at that time of the day there were very few cars left at the car park, as it seemed that during the day they line up the road in the hundreds. Standing in front of the lighthouse, I took the picture that marked the real beginning of the journey. In five days I planned to be in front of another lighthouse at the other end of the Pyrenees.

The weather had improved quite a bit, but there were dark clouds coming again and it was dusk, so I hurried to a campsite nearby before it started raining again. I checked in quickly and just as I finished putting up the tent, the rain came back.

I got changed in the tent and then ran to the bar under the pouring rain to sit down with a cold beer and plan the route for the following day.