Some days seem to have less than 24 hours, some others much more than that. I guess it depends on where you are, what you are doing and who you are sharing the day with. Today was one of those days that seem to have 36 or more hours, not because it felt long, but because by the end of it, chilling out with a cup of wine in my hand, it was hard to believe that we had time to fit so many things in only one day.

To start with, this was one of the long days on the motorbike. I had long forgotten my self-imposed 300km a day limit and was used to riding longer than that, but Nat, who was on her first motorbike trip ever, had insisted on not exceeding that distance. However, much as we wanted to ride easy and have time to visit things, real life was waiting for us back home, and we had a schedule to keep. That meant that if we still wanted to have some time to enjoy the Alps, we had to leave Croatia today and make it to Ljubljana in one day.

I wanted to follow a straight line, both to do less kilometers and to enjoy better landscape, but the GPS said it would take all day and having seen the roads in the Istria Peninsula a few years ago, I did not have any reason to doubt it. Taking main roads and motorways cut the journey down to seven hours, but added over 100km to it, as we had to go all the way to Zagreb. It was a long detour, and I was afraid so many kilometers on motorways would be boring, but in the end we decided to go for it.

We set off relatively early, feeling a bit sorry to leave the comfort of the apartment and the lazy days on the beach behind, but looking forward to being in the mountains again. The motorway had been extended since the last time I was here, and we did not have to spend too long on the coast road to get to it. It was a beautiful day, but there were some thick gray clouds lurking behind the mountains, right where we were headed. Seeing that, I left with the rain gear on, but had to remove it at the first fuel stop, as it was baking hot. As I was sitting by the bike in my underwear, another couple pulled up on a Yamaha – they were from Slovenia, and were also heading back home after a two-week trip around the Balkans. We chatted about Serbia and Bosnia I Herzegovina and they recommended visiting Albania and Macedonia as well. More countries on the ‘to visit’ list! 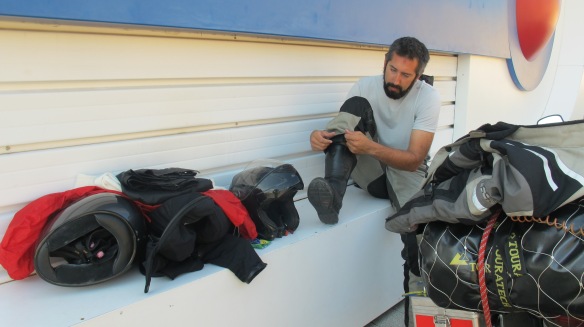 We spent the rest of the journey to Zagreb playing the game of trying to stay ahead of the rain, trying to read the weather and putting on and taking off the rain gear when we stopped for fuel or a rest, not wanting to make extra stops. We were relatively lucky and escaped the worst of it, although there was a moment in which heavy rain caught us unprepared and I just went for it, seeing that the sky was clear ahead. Fortunately, it did not last for long and we dried up fast.

We stopped for the last cup of coffee on the border with Slovenia, having ridden around Zagreb on the ring road. I had already seen the city, but it is a shame we did not have time to spend a night there so Nat could see it as well. We bought the only vignette I had paid for in the whole trip so that we could use the motorway all the way to the capital, and a couple of hours later, in heavy rain and rush hour, we arrived in Ljubljana. 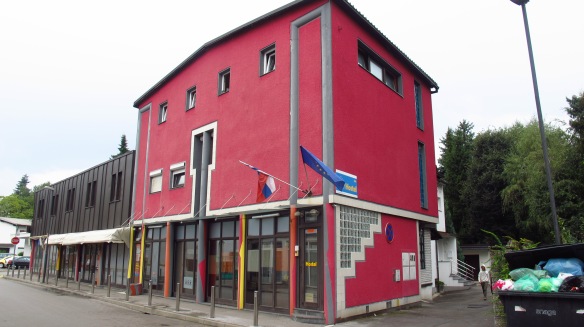 The hostel looked like a 90s teenage sitcom set (think Parker Lewis Can’t Lose) and was a bit far from the center, but it was nice enough and there was space to park the bike on the driveway. As we were only going to be there for a night, we had gone for the cheapest option and booked a shared room. It was still early, the rain had stopped and we had a couple of hours until dark, so we dropped our bags and then took a long walk to the city center.

Nat loved the city, and to me it felt somewhat special to be back here for the second time. I had arrived in Ljubljana on my third day on the road only, all my gear new and shiny, and here I was again, after thousands of miles. We wandered around, enjoying the lively streets, and when it got dark we sat in one of the bars lining the river and had some wine. 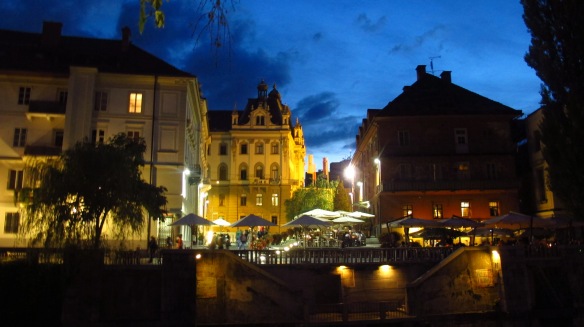 The rain came back while we were there, but it stopped for long enough to allow us to get back to the hostel on foot. We went to bed late, looking forward to getting to the Alps the following morning.