I got up late today, I really needed a long sleep after yesterday’s ride, and then I checked my food stash and made a shopping list for the following two weeks, as I will mostly expect to camp in Finland and Norway to keep costs down. I did some shopping, sent a couple of CouchSurf requests and then went out to explore the city.

And what a city! It went straight to the the top of the list of my favourite cities. It is beautiful, absolutely nothing to do with any other city in Russia, with its canals, river, majestic buildings… It is imposing, grand and at the same time welcoming, it combines an air of classicism with an undeniable feeling of cool and trendiness, and people look very central European rather than Russian. I really wish I could spend a few weeks here, as the city is definitely worth it.

In the evening I went up to the bar on the roof, which turned out to be a time café, where you pay for the time you spend there rather than the drinks, and you can have as many tea, coffee or lemonade as you want. I sat on a hammock and read my book as the sun set over the roofs of the city, casting a red glow over my drink. You could really tell I am already further north, as the sun set well past half past ten, at there was light until eleven.

I will leave you with a few pictures, and check out the Facebook page for the whole album. 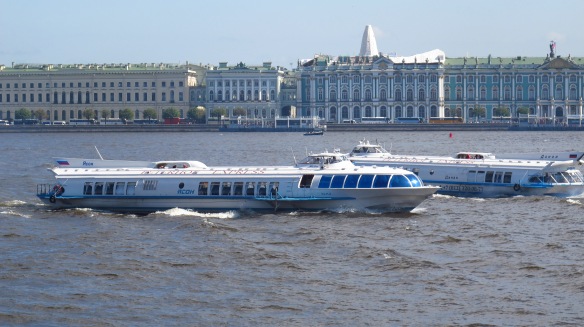 2 thoughts on “A drink on the rooftop”