This morning at about ten I got great news – Arkan called and said that the rim was already fixed and that he would come over in ten minutes to pick me up and take me to the workshop. Valentin, my host, had been acting as an interpreter all this time, as Arkan did not speak any English at all, but today he had work to do and could not come with us, so he told me to call him if I needed anything. While I was waiting for him, Dasha wrote to me on Facebook and told me that she and her friends were going to go for a swim on the river later in the day, and invited me along. We arranged to meet at half past seven near in the same bus stop as last time. It seemed that after a few really boring days I had some things to do again.

I went down to the street and five minutes later Arkan turned up in his black car. We drove to the rough part of town again and he parked in front of a place that looked more like a junk yard than a place that could repair and balance an alloy rim. I was a bit skeptical about the whole thing and how the result would turn out to be, but I had not been able to ask many questions about it due to the language barrier and not wanting to bother my host for translation too much, as I felt I was already abusing his hospitality, having been at his place for a whole week. By now I had learnt that the best thing to do in Russia is just to go with the flow, trust people and let them do their thing, and sure enough, despite the looks of the place, the rim was repaired and it looked very professional.

We took it to a tire workshop that did not look much better to have the tire fitted again. The rim problem was finally solved, but I was a bit worried that the tire might be damaged, as I had ridden for long stretches with no air in it and on really bad roads to get back to Astrakhan. Sourcing a new tire might prove to be difficult and I was not looking forward to spending more time stuck here. Fortunately, once the tire was fitted and inflated, the guy in the workshop checked it with water and soap and it did not seem to leak anywhere. He fitted it for free, which was really nice.

We took the wheel back to the car park where my bike had been for a week. Having the bike in a car park with 24-hour surveillance might sound as a bit of a luxury for a traveler on a tight budget like me, but it only cost 20 rubles a day, which is less than what you would pay for a bottle of water. Arkan helped me fit the wheel back on the bike and when he saw that the air valve cap was missing, he took one off his own car and gave it to me. He also noticed that my chain protector was not fitted, and I explained that I had lost one of the screws due to the vibrations in Kazakhstan. While I was cleaning and greasing the chain he got Valentin on the the phone, who told me that Arkan had told him to tell me that he would take me to a shop where I could get spare screws to fix it.

We got back in the car and he took me not to a shop, but to his own place, where he found a couple of screws that fit and showed me his bike, a Yamaha Fazer 1000. He explained to me that he had had a Honda Fireblade, but had crashed it into the back of a car. I noticed that he had no numberplate on the bike and he told me that it was so that the police could not fine him. Well, rather than explain that, he just made a gesture with his right hand, as if twisting the throttle wide open and said “fuck police”.

With the screw in my pocket, we got back into his car, and he got back on the phone. I thought he was taking me back to my host’s, but then he handed me the phone again. It was Valentin, who told me that Arkan wanted to take me with him and his kids for a swim. I said I was OK with it, as long as I was back in time to meet Dasha and her friends later.

We were driving to the outskirts when we hit a long queue of stopped cars. Without thinking twice, he drove down the street the wrong way and cut to the front of the queue. It turned out it was a level crossing, they are everywhere in Russia and sometimes it takes very long for trains to pass, thus the long queues. We had been waiting for a while, but no trains turned up. Arkan, probably bored of the wait, decided to show me something. He lifted the armrest and took out… a gun. With the two kids in the back seat, who did not seem to be at all surprised. I guess it was not the first time they had seen it. He removed the gun magazine, which was charged with real bullets, removed the bullet from the chamber and gave it to me. It was the first time I had ever held a gun, and I thought that for a first time, it was quite cool that it was an outlaw Russian biker’s gun. I just hoped he did not kill anybody with it before I leave the country, as it now has my prints on it.

We finally made it through the crossing and stopped at a small shop to pick up some friends of his – a skinny guy with big tattoos that looked as badass as Arkan, his girlfriend Natasha, in very skimpy clothes and another guy with a stutter and half rotten teeth that made me think of those “Meth? Not even once” memes.

We went to a beach between a railroad bridge and a dry dock with a rotting ship in it, which might not sound great, but it was much quieter, nicer and cleaner than the beach in the city center. While we were there we talked about the trip and bikes, and compared prices between bikes in Spain, Russia and Georgia, as it turned out that Arkan was not Russian, but from Georgia. Then, best as he could using gestures and drawing in the sand, he explained that he travelled to Germany quite often, apparently on some kind drug-related business, I gathered. The conversation then turned a bit, let’s say uncomfortable. Using gestures and a few English words, they told that Natasha gave great blowjobs – they all seemed to have had a go at that – and then said “tonight, drugs, -Russian word for sex- Natasha” I laughed and played along for a while, but when we were leaving I told them that I was already meeting other people that night, which was true.

We dropped Arkan’s friends back in the shop and on the way back to the center he told me that he was a boxer and also practiced several other martial arts, and pointed at his nose, which had obviously been broken several times. Pointing at his kids and his wedding ring, he indicated that it was a good way to let out steam. He also told me that he used to be into illegal street racing in the past, he had owned an Impreza and an M5, but had given it up when he got married.

Back at Valentin’s I thanked him for everything, he had been a really nice guy and had gone out of his way to help me.

I packed my things to get ready for departure the following morning and then took one of the Russian microbuses with crazy drivers to the center to meet Dasha, I did not feel like walking almost 7km again. We bought some beer and she took me to a smaller beach on the other side of the island where we had been last time. It was already late, and the sun was setting, it was a beautiful sight, a huge red ball of fire behind the factories on the other side of the river while I was swimming in the cool water.

After the sun had set, we got back on the bridge and I discovered that the buses stop running at 9 pm, which meant a long walk back home… But then the guys said that there was no way I was leaving so early, we got a taxi and headed for the place where one of them lived, a really old wooden building dating from before the Russian Revolution. It had veranda overlooking the inner court, and we just sat there in the cool night air having a drink and playing the guitar. It made me think what an amazing experience this trip had been so far, there I was sitting with people I had just met, all of them really nice, offering me their drinks, telling me about the Russian songs they were singing. 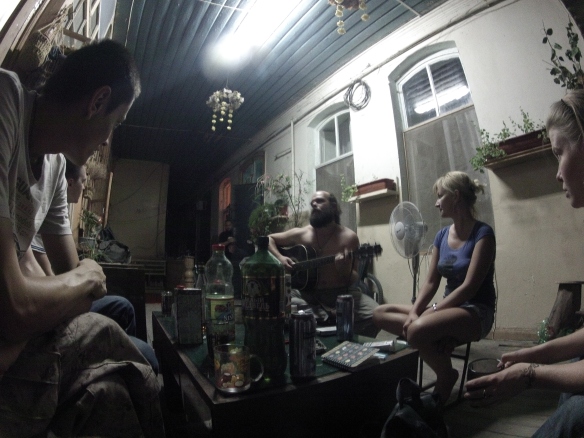 I left at midnight, as I wanted to get up early the following day for the ride back to Volgograd. It was not especially long and the roads were quite good, but I still did not know how the rim repair would hold, so I wanted to have plenty of time just in case. Dasha walked me home, we exchanged contacts and she wished me good luck with the rest of the trip.