I have read a lot about Russian bureocracy in all the adventure travel discussion forums I have visited, so when I started looking for information on the kind of visa I would need to enter Russia multiple times on a motorbike, without exact dates of entry or exit, hotel reservations or letters of invitation, I already expected a certain degree of difficulty.

After reading about different types of visas, requierments and companies that do all the paperwork for you, I decided to try and do it myself in order to save a few euros, so I went to the Russian consulate on Barcelona.

As you would expect from such a country, the consulate is not an office on the second floor of a building in the center, but an impressive mansion in the high part of the city. Their web site clearly states that it is impossible to visit it without an appointment, so I logged in and filled in the necessary information to get one. The system turned out to be rigidly Russian: the only option available on the list of reasons to visit the consulate is ‘visas’. I guess you need to be somebody and know the right people to visit the consulate for any other business. I got an appointment for a Thursday morning, and when the day came, I went there hoping to get first hand information on exactly what kind of visa I needed for such a trip, and if whoever was there was nice enough, maybe some information on border crossings, state of the roads, etc. How wrong I was!

The entrance to the front court of the building consisted of a two-door cage system, with security cameras, an intercom and a burly security guard who was letting somebody out and quickly closed the door behind her as he saw me approaching. When I reached the first door he blurted out something in Russian and I told him I had an appointment (in Spanish, of course, my Russian is non-existent and if the guy is stationed in the Consulate in Barcelona, I expected him to understand the local language…) and he said ‘name?’ I gave him my name and ID number and he proceeded to check a printout he had on a folder. He nodded and pressed a button that let me through the first door and into the cage. I had to wait for the first door to close and then somebody opened the second one from somewhere else. He pointed at the main entrance to the mansion and said ‘left’.

The arched door opened into a roomy entarnce hall, where some people were sitting, apparently waiting to be called. The door leading from the hall into the building was open, and I caught a glimpse of some people on desks and guys in suits walking around. I was wondering whether they also had had to make an appointment through the web site and how they had managed to get some other option than ‘visas’ on the menu when the voice of the security guy saying ‘left’ again brought me back to real life. He was behind me, pointing at a smaller door to the left of the hall. I walked in and found a small room with a couple of tables to fill in forms on and a tiny window to the right. It was obvious that the rest of the mansion was not accessible to mere mortals.

There was nobody queuing at the window, so I walked to it. Behind bullet-proof glass was a bored looking soviet civil servant stamping visas. He raised his sight, saw me and said ‘papers?’ I started explaining my story – travelling on a bike, entering several times into the country, no invitation, blah, blah, and I think he was overwhelmed by the sheer number of words I was wasting; everyone I had met so far in the building seemed to use only one word at a time. He said ‘they’ll inform you’ and pointed behind me. I turned around hoping to find a smiling young Russian girl sitting behind an information desk, but there was no one else in the room. I looked at him and he pointed again. This time I realised he was pointing at a notice board on the wall where there was a poster advertising a company called Central de Visados Rusos which arranged visas. I had seen other companies online, and several people had recommended using Real Russia, but I wanted to avoid paying a company to do the paperwork if I could do it myself. However, it was clear that was all the information I was going to get in the consulate, and the offices of the company were near my home, so I decided to go and see if they could shed some light on how to get the visa I needed.

There was no security guard on my way out, so I approached the first door and pressed the button on the intercom. Someone barked a few words in Russian and I replied ‘I want to get out.’ The first door buzzed opened and I walk into the cage. Once the first door had closed, the second one buzzed. I pushed it, but it would not open. I waited for them to unlock it again, but it refused to move. There was nobody in the front court and I was stuck in between doors. Great. I pressed the intercom button and asked to be let out again. The same voice yelled something in Russian and the door buzzed again, but it refused to open, no matter how hard I pushed. I was starting to feel a bit stupid trapped between doors when a woman walked up to the door from the street, said something in Russian to the intercom and the door buzzed one more time. She pulled it effortlessly from the outside and walked in, as I took the chance to leave that charming building.

I did find the smiling young Russian girl I was hoping for in the visa company. She listened to what I wanted to do and explained that the only multy entry visa for Russia is a business one, the tourist visa only allows people to enter the country twice in a period of one month, a business one allows multiple trips over a period of three months. She said that it did not matter that I was not going to go there on business, I only needed a letter of invitation from a Russian company in order to obtain a visa. When I asked her how I would get one without contacts, she smiled, handed me a form and said ‘we provide them for 50€’.

It was becoming clear that I was not going to be able to do the whole application process myself, and on top of that, they were the only company that the Russian consulate in Barcelona had officially approved to handle visa applications, and I still had to apply for the visas for Kazakhstan and Mongolia, so I decided to save time and use their services. 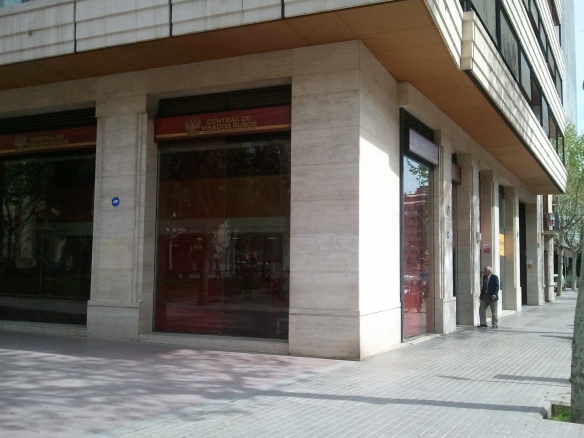 After having my picture taken, taking out travel insurance in one of their approved companies, filling in a request for an invitation letter and the form downloaded from their website and making sure my passport didn’t expire in the next six months and had at least two consecutive blank pages, I finally handed in all the paperwork needed this week, and by Tuesday next week I should have a multy entry business visa for Russia.